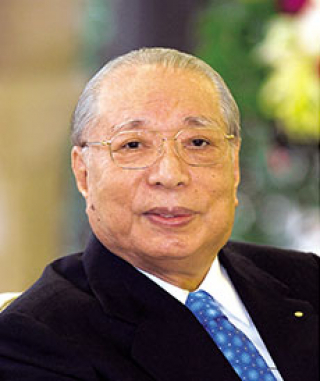 Daisaku Ikeda
Daisaku Ikeda, born on January 2, 1928 in Tokyo, is an educator, philosopher, prolific author and peacebuilder whose efforts for the promotion of humanistic education, intercultural dialogue and exchange, and peace have been widely recognized around the world. He is the president of the Soka Gakkai International (SGI) lay Buddhist association.

Ikeda founded the Soka school system on the conviction that humanistic, student-centered education is the foundation for the development of a peaceful, life-affirming society. The school system runs from kindergarten to graduate study and includes kindergartens in Japan, Malaysia, Singapore, Hong Kong and Korea, a kindergarten, elementary school and junior high school in Brazil, two co-ed elementary schools and high schools in Japan (Tokyo and Osaka), Soka University and Soka Women's College, and Soka University of America.

Ikeda is also the founder of a number of international non-profit peace and cultural institutions: The Institute of Oriental Philosophy, the Toda Institute for Global Peace and Policy Research, the Min-On Concert Association (promoting intercultural exchange through the performing arts) and the Tokyo Fuji Art Museum.

Daisaku Ikeda was born to a family that harvested edible seaweed for a living. The fifth son, he was in his early teens when Japan entered World War II in the 1940s. His direct experience of Japanese militarism and the horror and needless suffering of war left a profound mark on him, becoming the chief motivating factor of his later peace activism. At the same time, his experience of the influence of militarism and ultranationalism on education during this time powerfully shaped his perspective on the value of humanistic education. For the militarist government of Japan, education became the means for molding children into obedient servants of the state and its war aims. Ikeda experienced first-hand the power of education to profoundly shape, either negatively or positively, the outlook and expectations of young people.

The end of war brought drastic change to Japanese society and its values. As Ikeda writes, “The bizarre system of values drilled into us in the wartime years had been exposed as fraudulent and razed to the ground."

It was at this time, at the age of 19, that Ikeda met Josei Toda (1900-1958), who became his lifelong mentor. Toda was an educator and Buddhist philosopher who had been imprisoned during the war for his opposition to the policies of the militarist government. Inspired by Toda's humane and compassionate character, his extraordinary insight into human nature and social phenomena and his deep determination to bring about a positive transformation of society, Ikeda devoted himself to carrying forward his mentor's ideals and vision.

An avid reader with a passion for learning, Ikeda enrolled in night school while working full time at a company run by Toda. When Toda's business failed amidst the stagnation of the postwar economy, most of his employees abandoned the company. Ikeda, however, remained and dedicated himself to supporting Toda and preventing him from financial ruin. To do this, he had to give up attending night school. In return, Toda—who had been an accomplished educator in the pre-war era—offered to give him private tuition in a variety of subjects that would be the equivalent of a university-level education. These lessons at what Ikeda later called Toda University continued for ten years until Toda's passing. Toda gave Ikeda a thorough and wide-ranging education both the humanities and natural sciences, including economics, history, geography, mathematics, physics, chemistry and astronomy. “Ninety-eight percent of what I am today," Ikeda has remarked, “I learned from my mentor." Later, Ikeda graduated from Fuji Junior College (present-day Tokyo Fuji University).

Toda passed away in 1958. Succeeding him, Ikeda has undertaken a broad range of activities on a global scale for the promotion of education, peace and human happiness. A key focus has been the promotion of dialogue. Ikeda has engaged in wide-ranging dialogues with a diverse spectrum of individuals from around the world in an effort to build bridges of mutual understanding over the divisions of ideology, nationality, religion, etc. and seek out viable solutions to global problems. His citizen diplomacy during the 1970's helped lay the groundwork for the normalization of Sino-Japanese relations and also contributed to the easing of political tensions between China and the Soviet Union.

Over the past five decades Ikeda has held dialogues with some 1,600 leading figures in the fields of politics, education, academia, science, peace activism, business and the arts. More than 50 of these have been published in book form. Examples include his published dialogues with British historian Arnold J. Toynbee, former Soviet president Mikhail Gorbachev, Chinese literary giant Jin Yong, the “father of peace studies" Johan Galtung of Norway, U.S-based futurist and economist Hazel Henderson and the Nobel Peace Prize-winning scientists and peace activists Linus Pauling and Joseph Rotblat. The Toynbee-Ikeda dialogue, Choose Life, in particular, has been published in 28 languages and widely read around the world.

Including these dialogues, Ikeda has published over 100 works, ranging from philosophy to biographical essays to children's literature. A renowned poet, he has been named poet laureate by the World Academy of Arts and Culture (1981) and World People's Poet by the World Poetry Society Intercontinental (2007), which, in 1995, conferred its World Poet Laureate Award upon Ikeda.

He has also delivered addresses at 28 universities and academic institutions abroad, including Moscow State University, Peking University and Harvard University.

Amongst his many endeavors, Ikeda has described the promotion of humanistic education as the culminating undertaking of his life. Having turned 80 in 2008, he continues to energetically pursue this vision through his many writings and proposals, his dialogues, and his constant encouragement of young people, whose development, he says, is his greatest source of joy.

Back to top of the page