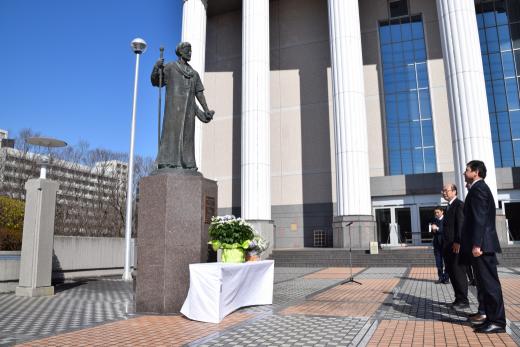 Offering of Flowers for Alisher Navoiy, an Uzbekistani Poet, at Soka University

On February 5 (Wednesday), First Secretary Ajizov Sirojeni and First Secretary Otabek Gaipov of the Republic of Uzbekistan visited Soka University, joining a ceremony to offer flowers commemorating the 579th birthday of poet Alisher Navoiy of Uzbekistan (date of birth: February 9, 1441) of whom a statue is placed in the front courtyard of Soka University’s Ikeda Auditorium.

Alisher Navoiy (1441–1501) is considered the founder of Uzbek literature, and not only was he a poet, scholar, musician, and penman, he was also a statesman, mediating conflicts within the territory, and he devoted himself to reducing tax on citizens. He also carried out goodwill projects and protected the arts using his own finances. To this day, he is respected by many citizens in Central Asia.

Lastly, First Secretary Ajizov Sirojeni shared: “By learning about the life of Navoiy, we would like to create a resource for living in this modern age.”

Words written on the base of the Navoiy statue at Ikeda Auditorium:
All people of the world
Do not harbor hatred to one another
Be good friends to one another
Friendship is the way of human beings