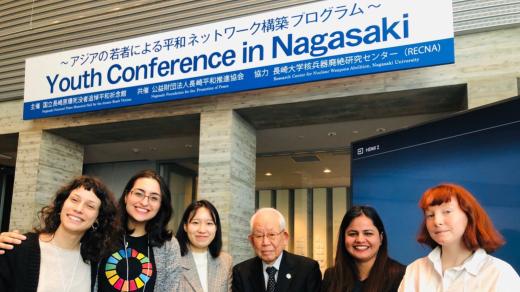 This conference has been held since 2010 with the aim to build and expand on the network of peace involving Asian youth. This time, approximately 30 faculty and students (undergraduate and graduate students) from Malaysia, South Korea, and China gathered in Nagasaki. On the first day, in addition to a keynote speech by an atomic bomb survivor, the participants visited the Nagasaki National Peace Memorial Hall for the Atomic Bomb Victims and the Nagasaki Atomic Bomb Museum. On the second and third days, they exchanged views based on the theme of peace through group work and presentations among the participants.

Paola who participated from Soka University shared: “One of my goals is to design virtual reality glasses with which one can experience the atomic bombs of Nagasaki and Hiroshima. Through this project, I want to make sure that memories of past events are not forgotten, and I want to convey to many people the damage of atomic bombs in a way that makes people feel like they have experienced it directly.
Also, through this conference in Nagasaki, I was able to build a network with researchers from various counties. I will cherish these encounters and will engage in my future research activities. I will also hold a workshop based on the theme of peace, together with the five members that participated from the Graduate School of International Peace Studies.”