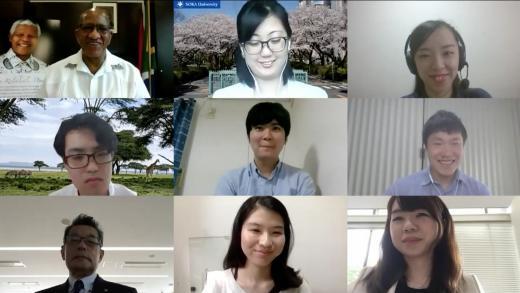 On July 10th (Friday), in commemorating the July 18th “Nelson Mandela International Day,” a lecture was delivered (via Webinar) by the South African Ambassador to Japan, H.E. Mr. Lulama Smuts Ngonyama. Approximately 220 students, faculty, and staff from Soka University and others participated.

Aiming to contribute to the promotion of the United Nation’s Sustainable Development Goals (SDGs), Soka University has been holding “Value Creating & SDGs” serial events as part of the 50th-anniversary project of its founding for 2021. This was a second event of its kind following the TICAD7 post-event “Africa and SDGs” held in September of last year.

In South Africa, apartheid took place from 1948 to the early 1990s. This was a racial separation and discriminatory system designated by law. Former President Nelson Mandela of South Africa strongly opposed the government, and in 1964, he was given a lifelong imprisonment on charges of treason. After approximately 27 years in prison, he was released in 1991. In 1993, he received the Nobel Peace Prize together with the then President Frederik Willem de Klerk. In the following year of 1994, he was inaugurated as president based on the nation’s first election participated by all races, and served in that role for 5 years.

The lecture was delivered in English titled, “The Life of Nelson Mandela.” Ambassador Ngonyama introduced his inspirational quotes on education that Mr. Mandela cherished as well as on children and opposing hatred. He said that Mandela strongly believed in the power of education and that through education, the attitude of the people of the world can be changed. The ambassador also shared the importance of respecting one another regardless of one’s color of the skin or status. After the lecture, he responded to questions posed by student representatives.

[Inspirational quotes made by Mr. Mandela which were introduced by Ambassador Ngonyama]
“No one is born hating another person because of the color of his skin, or his background, or his religion. People must learn to hate, and if they can learn to hate, they can be taught to love, for love comes more naturally to the human heart than its opposite.”
“Education is the most powerful weapon which you can use to change the world.”

Comments from the participants were as follows:
“I was deeply moved, feeling how the late President Nelson Mandela’s profound philosophy based on humanism is succeeded by the ambassador. Also, the ambassador upholds what we practice such as 'value-creating education' and 'first we ourselves take action,' so I was also very happy to know that we have a common ideal.”
“Hearing the ambassador share with us, I felt his respect for the late President Mandela, and I was also happy that he shared his feelings for Soka University’s founder. I could feel his warm character when he was conducting questions and answers with representative students.”