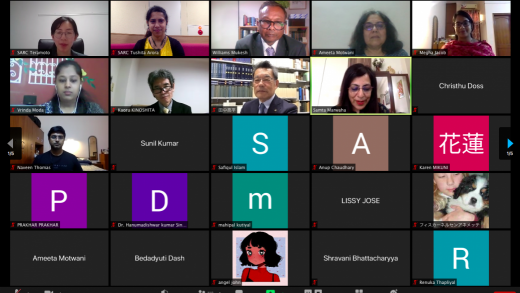 Commemorating the First Anniversary of the Opening of the South Asian Research Center by holding an Exchange Event with India’s Jesus & Mary College, University of Delhi

The South Asian Research Center opened last year on July 16th, and up until now, it held many academic symposiums and small scale events. It is contributing to the promotion of friendly exchanges between Japan and India through research and academic exchange.
The academic exchange event was held online under the theme, “The History of Cultural Exchanges between Japan and India,” where Soka University’s Mukesh Williams, Advisor of the Center, gave a lecture. A discussion took place after that.

Participants shared the following comments:
“I began learning about India since I joined Soka University. I would like to interact with many people from India and strengthen my abilities so that I can become a bridge between India and Japan.” (Soka University student)
“I was interested in Japan since I was in high school. Through this event, I felt that I want to study at Soka University.” (Jesus & Mary College student)