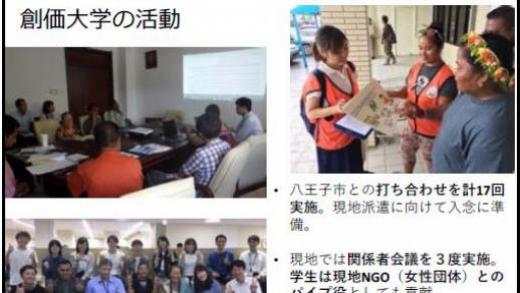 On November 12th (Thursday), 2020, the “Trash Issue Improvement in the Islands of the Pacific Ocean – Cooperative Style 2R Project in the State of Chuuk of Micronesia” JICA Partnership Program Completion Report Meeting took place online. Soka University Professor Takehiro Usui and Ms. Kanon Goto (senior) (both from the Faculty of Economics) attended as part of the project’s team, and they took the podium and presented on their activities.

This project was conducted in the three years from the academic year 2017 to 2019 as a “JICA Partnership Program” held by the city of Hachioji together with JICA. Using know-how in reducing trash in the city of Hachioji, the project endeavored to improve the situation in the Federated States of Micronesia in the Oceania region in facing issues where huge amounts of trash are left outside people’s homes or in the ocean. Soka University was selected from among the city’s public applicants, and it was decided that the university would participate in this project. Said faculty member and student then travelled to the local site and got involved in a 2R project (Reduce and Reuse).

At the project’s report meeting, a staff in-charge at Hachioji City Office presented an overall picture of the project and the challenges in Micronesia as an island nation. Micronesia’s State of Chuuk has been overflowing with trash due to lack of a recycling system to reduce trash amounts and/or due to the frequent breakdown of trash-collecting vehicles. Therefore, 2R promotion activities as well as projects to improve the state of trash collection vehicles took place.

Professor Usui reported on a survey conducted locally and on a statistical analysis of surveys held at stores, as well as on a workshop held with local residents. He shared that there was a shift from “the phase in which ‘we’ come from Japan to solve issues” to a phase of “raising local experts whereupon ‘they’ carry out the task.” He also shared that he will continue to be engaged with the Federated States of Micronesia through new research assistance.

Ms. Goto, who also participated, shared her activity report and commented as follows: “The local people incorporate things around them in nature, such as by creating fans using palm tree leaves. Through holding exchanges with them, I learned a lot of such wisdom from them. Once I was able to shift my way of thinking from ‘I will contribute to the locale’ to ‘I will learn from the locale,’ I began to be able to incorporate what I learned in our activities.”