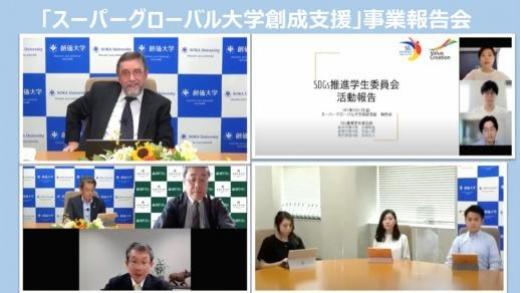 About 250 Soka University staff, faculty members, and students participated in an online briefing session on the Top Global University Project held on June 11 (Friday). The session was part of a series of "Value Creation × SDGs," which aims to promote the SDGs set by the United Nations.

In 2014, Soka University was selected as one of the 37 public and private universities under the Top Global University Project (Type B: Global Traction Type) promoted by the Ministry of Education, Culture, Sports, Science and Technology (MEXT). Soka University has achieved the goals it set for the globalization of the campus, as demonstrated by consecutively earning the highest rating of "S" (5 levels from S to D) in the second interim evaluation released in February 2021. The purpose of this briefing session was to report to the parties both inside and outside the university on the achievement and progress of various initiatives, plans, and other SDGs initiatives that our students have promoted independently.

The briefing session started with opening remarks from Soka University President Yoshihisa Baba, followed by reports from the students representing the SDGs Promotion Student Committee and the Global Citizenship Program (GCP). The students reported on awareness-raising initiatives and a networking event among various groups promoting SDGs in the university. The presenters also reported on the students who have been engaged in activities sponsored by the Cabinet Office.

After the students' presentations, Ryohei Tanaka, director of the Global Core Center and Soka University’s vice president, introduced the initiatives carried out under an educational program titled "Global Initiative for Humanistic Education⁠—Fostering Global Citizens for Building Peace and Sustainable Prosperity." The vice president shared the progress of the initiatives to foster "creative global citizens," such as an increased number of exchange students between Soka University and overseas universities, the improvement of the educational program in its global workability, and the globalization of governance within the university.

The next speech was by Mr. Kuniaki Sato, Deputy Director of the Office for International Planning, Higher Education Bureau, MEXT, titled "How the next-generation higher education should be." He described the situations of universities in the "new normal" and the current trend of global education through the internet and expressed his expectation of Soka University's initiatives in the future.
Following Mr. Sato's speech, a panel discussion and Q&A session were held on the theme of "SGU's initiatives focused on the measurement of student growth and the improvement of their motivation." The panel discussion was between Vice President Ryohei Tanaka of Soka University, former Vice Executive Hajime Nishitani of Hiroshima University, and Vice President Akito Takasaki of Shibaura Institute of Technology.

Lastly, Mark Williams, Vice President of International Christian University, gave a lecture titled "Global citizenship education and the mission of universities: Comparisons with the universities in the UK." He stressed the importance of universities with diverse environments so that they can nurture students desired by the international community.

Related to this meeting, the closing event for the "Value Creation × SDGs" Week took place online on June 14 (Monday). The event featured a panel discussion under the theme of "Soka (value-creating) education and global citizens" and participated by Dr. Masumi Hashimoto Odari of the University of Nairobi, Kenya, Dr. Nantarat Charoenkul of Chulalongkorn University, Thailand, Soka University's Prof. Hiroko Tomioka, and Dean of the Faculty of International Liberal Arts Lawrence MacDonald. This was followed by a keynote speech by Dr. Douglas Bourn, Director of the Development Education Research Centre at the University College London, UK, titled "Global citizenship education and the SDGs."