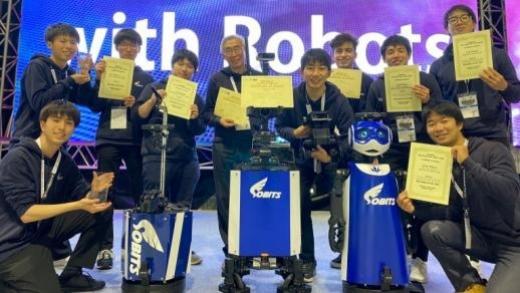 RoboCup Asia-Pacific 2021 Aichi Japan is a robot competition aiming at deepening research about and education of autonomous robots that are a combination of robotics and artificial intelligence; this was the first time the competition was held in Japan. The competition consisted of six subjects, namely, Soccer, Rescue, ＠Home, Industrial, Junior, and RCAP Challenge. Additionally, the leagues are arranged according to the subject matter. This competition on the topic of Next Door with Robots: Ahead, Together with Robots was implemented through a combination of an onsite competition and a virtual competition via the internet. A total of 107 teams participated, and the majority of them were students from Asia and the Pacific Region.

SOBITS envisaged robot utilization in daily life and participated in RoboCup@Home competition by performing activities that could be of help in people’s lives. SOBITS challenged themselves by competing in three leagues, the most in the team’s history. Namely, RoboCup@Home/Open Platform League, where they showed high-level competition skills with robots manufactured by themselves, RoboCup@Home/Education League, where they used actual robots to compete in basic skills, and RoboCup@Home/Simulation Open Platform League, where they competed in human vs. robot interaction by using a robot simulator and VR. Each league is evaluated through a combination of the overall score received in various competitions and the Technical Challenge ranking received for the research presentation. SOBITS was awarded for their overall score and Technical Challenge in each of the participating leagues, among which they won the first prize in two. Additionally, the RoboCup results as well as the achievements up to the present were evaluated and the Team SOBITS was presented with an award from the Japanese Society for Artificial Intelligence.

The Team Leader Yuki Ikeda (Graduate School of Science and Technology, 1st year doctoral course student) shared his satisfaction with the following comment: “This year (2021) is the 10th year since SOBITS first participated in the RoboCup. SOBITS has displayed the team’s skills on various occasions until this point, such as guaranteeing several victories in the Simulation League where simulators are used, the first victory in Education League (2018), where actual robots are used, and others. Additionally, this year we have also challenged ourselves in the most difficult among the leagues using actual robots, the Open Platform League, and even if we just barely missed the strongest team’s result, we were able to secure the 2nd place. When compared to my first competition in 2018, this achievement is really unbelievable. In these 10 years, SOBITS has evolved into a team that is capable of competing on a global level. In order to bring Soka University to the top of the world, and in order to express sufficient gratitude to everyone who supported us on our way, we will add additional power to our daily challenges and activities.”