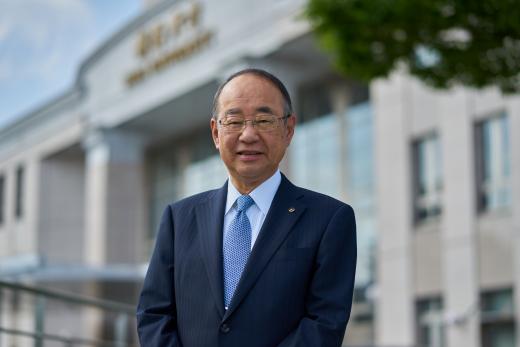 New Year’s Greetings (Chairman of the Board of Trustees Mr. Tashiro)

I wish to extend my sincere greetings for 2018.

In 2010, Soka University announced its “Soka University Grand Design” long-term plan in looking ahead to the 50th anniversary of its founding, and the university has been engaged in nurturing “creative individuals” in its goal to become an ideal university based on its founding spirit, as envisioned by the founder, Dr. Daisaku Ikeda. In response to the demands of the times, the university has developed by establishing and reorganizing new faculties and departments, and currently encompasses eight faculties, four graduate courses, and two courses in professional graduate schools.

The School of International Peace Studies will be established in the graduate program in April of this year, and through it, capable individuals that can contribute to world peace and the welfare of humankind at international institutions will be fostered. Also, in response to the heightened regard for lifetime learning, the “Department of Human Studies, Faculty of Letters” will be established as part of our correspondence courses. In addition, at Soka Women’s College, two departments will be reborn as the “Department of Global Business Studies” with the aim to nurture capable individuals that can play an active role in the global society.

In April of last year, thanks to sincere support from many individuals, the “Takiyama International Dormitory” (for male students) and the “Manyo International Dormitory” (for female students) were completed. At these residences, students from various places around Japan and the world have gathered and are studying and living together, transcending differences of ethnicity, culture, and language, living comfortably in “dorm life.”
In order to support the students’ growth regarding financial aspects, Soka University is also making increased efforts to establish a scholarship system that requires no obligation of restitution.

The fact that the university is able to prepare an environment in which students can study, feeling assured, is thanks to the sincere support and cooperation of many individuals, including alumni and guardians. I would like to take this opportunity to express my deepest appreciation to all those who have given their generous support.

Soka University and Soka Women’s College are determined to create an ideal campus toward the 50th anniversary of the university’s founding, while always firmly upholding the founder’s spirit of “Placing the needs of the students first.”

In closing, I would like to express my heartfelt prayers for your continued good health and happiness as we welcome 2018.