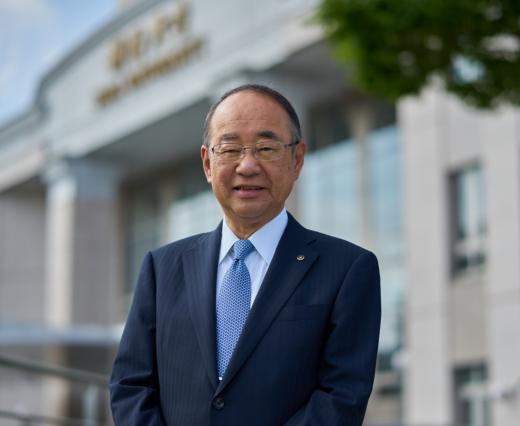 I would like to express my best wishes for the New Year.

For the first time in three years, Soka University’s Athletics Ekiden club made its third appearance in the 96th Tokyo-Hakone Intercollegiate Ekiden relay marathon held on January 2 and 3. Through great teamwork, our 10 runners completed a total of 217.1 kilometers with a stunning result of 9th place overall (7th place on the outward route and 9th on the return route), getting seeded for next year for the first time. I would like to express my sincere gratitude to the runners who achieved such success as well as to the support staff and everyone who cheered them on from the roadside. The runners took advantage of this experience and have started to aim for the next goal. I would like to thank everyone who offered considerable support to the athletes in participating in the race this year. We look forward to your continued support.

Soka University has been working to achieve the goals under the Grand Design toward the 50th anniversary in 2021. Considering the changes of the times, the university has established new faculties and departments and has reorganized existing ones, thereby developing into a comprehensive university with eight faculties, five graduate schools, and two professional graduate schools.
In addition, we have also striven to enhance student life by establishing the Domestic and International Student Dormitory, where Japanese students and international students live together, by operating shuttle buses between Shinjuku and our campus, and by providing a 100-yen breakfast to improve the nutritional balance of students. This year, the government started to provide subsidies for higher education. Soka University will review its own scholarship system accordingly and make the system more fulfilling for students. The university will also make efforts to enhance scholarships for international students from all over the world. All of these efforts are accomplishable thanks to the parents, graduates, and many people who have supported and cooperated in creating an environment where students can learn with peace of mind.

This year will see a full-fledged start for our 50th-anniversary project. As a core of the efforts, we have renamed the Soka Education Research Institute to the “Daisaku Ikeda Memorial Institute for Soka Education Research” with the aim to evolve further, and we have set a goal to establish a hub for “global citizenship” education by building a network of researchers and disseminating educational and research outcomes. Further, through symposiums, commemorative exhibitions, and publishing activities on the theme of the SDGs, we will take the first step toward the next 50 years of Soka University.

In implementing this project, we will start asking for donations in April this year under the “Donation Project for the 50th Anniversary of Soka University and the 35th Anniversary of Soka Women’s College.” While we understand the ongoing severe economic situation, your support and understanding of the intention of this request will be greatly appreciated.

Continuing on from 2019, Soka University and Soka Women’s College will keep working toward the 50th anniversary under the founder’s motto of being a “student-first university.” Finally, at the beginning of the new year, I would like to wish you good health and happiness.

Sincerely,
Yasunori Tashiro
Chairperson of the Board of Trustees
Soka University