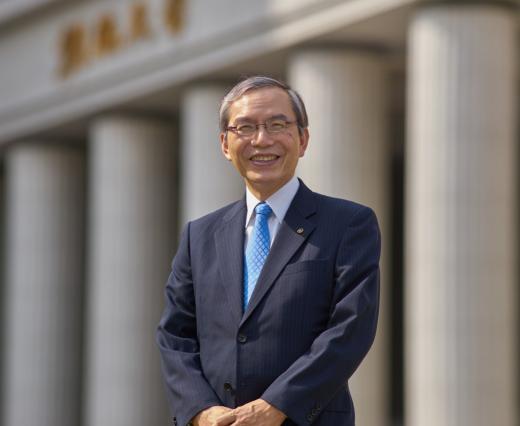 Happy New Year. I hope you will have a wonderful 2020. I would like to express my sincere wish for your good health and happiness.
In 1971, Soka University started with three founding principles: “Be the highest seat of learning for humanistic education,” “Be the cradle of a new culture,” and “Be a fortress for the peace of humankind.” Since then, the university has been working to develop creative global citizens who create value in any place in the world.

Last year, Soka University earned high praise from both at home and abroad. The Times Higher Education (THE), a British journal of higher education, published “THE University Impact Rankings 2019,” which ranks universities worldwide in terms of the Sustainable Development Goals (SDGs). Soka University was ranked within 101–200th (4th place among Japanese universities). The organization also published THE World University Rankings, Japan edition 2019, with Soka University being ranked 16th in the “internationality” category. In addition, in the QS Asia World University Rankings published by U.K.-based university ranking organization QS Quacquarelli Symonds, Soka University was included for the first time, in the 401–450th ranking. The successes of our students in 2019 were remarkable as well in various fields, including participation in the 96th Tokyo-Hakone Intercollegiate Ekiden relay marathon, the winning of championships for three times consecutively in the Economics Record Examination (ERE) University Contest, and their participation in the Cabinet Office’s international exchange projects and international conferences.

Through its Grand Design toward the 50th anniversary, which will fall in 2021, Soka University has earned numerous achievements. They include the establishment of new faculties, the globalization of the campus, and the improvement of its educational environment. On the other hand, the university is facing new challenges from the surrounding social environment. For example, globalization has been progressing as society is becoming highly information-based, and industrial structures have been changing due to AI (artificial intelligence), ICT (Information and Communication Technology), and other technological innovations.

In order to train students who can survive this era with its unpredictable future, the university will publish a new medium- to long-term plan toward 2030 called, “Soka University Grand Design 2021–2030” (tentative name) this April. We have widely invited opinions on the draft last year and received a lot of feedback. We are grateful to have received many valuable opinions. We will refer to these opinions and make our utmost efforts to become a university that fosters global citizens who can create value.

As with previous years, this year, based on the founding principles set forth by the founder, Dr. Daisaku Ikeda, each and every staff member will continue to make every effort to enable the full potential of individual students on our campus, which offers a highly diverse environment, toward the 50th anniversary.