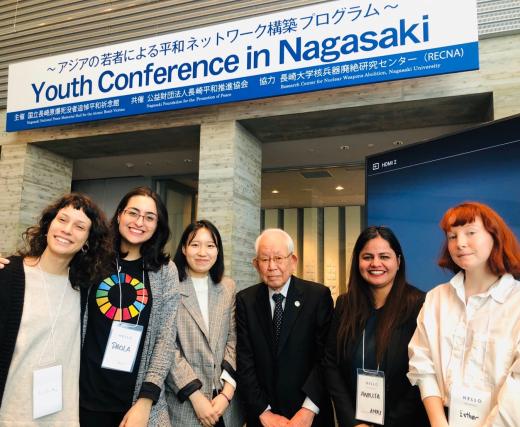 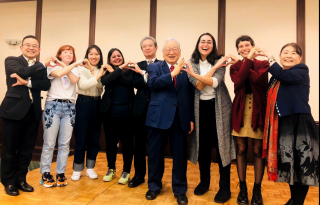 From February 10th - 12th, the "Youth Conference in Nagasaki" was held and five International Peace Studies students attended the conference. One of the participants, Paola Bellucci Ortolan, from Brazil, shares her experience

"The basis of peace is for people to understand the pain of others." (Katsuji Yoshida, Nagasaki Atomic Bomb Survivor).

How was your experience? 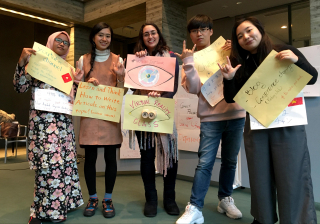 I had the fantastic opportunity to attend the three days conference "Youth Conference in Nagasaki" with four Soka classmates: Ankita Sehgal (India), Chiara Polverini (Italy), Esther Garret (UK) and Seungjin Chung (Korea). All of us are enrolled in the International Peace Studies program.

On the first day of the conference, we met 30 young students from 13 different countries. During the morning, we visited the "Nagasaki Atomic Bomb Museum" and the "Nagasaki National Peace Memorial Hall for the Atomic Bomb Victims" to know in depth the dangers and risks of nuclear weapons. The museum exhibits objects that were exposed to radiation from the atomic bomb during World War II and showed stories of survivors and victims. It was a heartbreaking experience but also very educational. After the visitation, we had four significant lectures from Mr. Yoshiro Yamawaki (Hibakusha), Mr. Tomihisa Taue (Mayor of Nagasaki), Dr. Satoshi Hirose (Vice Director of the Research Center for Nuclear Weapon Abolition at Nagasaki University) and Dr. Brian F.Burke-Gaffney (Professor of Nagasaki Institute of Applied Science).

I asked Mr. Yamawaki, a survivor of the atomic bomb, what are the conditions to achieve peace. He listed three points: (1) no war and violence, (2) freedom of thought, religion, and speech, (3) no hunger and poverty. Mr. Taue insists that young people have the mission to care about the abolition of nuclear weapons. He also shared some creative initiatives around the world to increase awareness of atomic perils. Professor Hirose reminded us that we still have thousands of nuclear weapons on the planet, "If the 13,880 nuclear warheads exist, so they can be used." Lastly, Professor Burke-Gaffney told us about the history of Nagasaki, exploring the cultural diversity and co-existence as essential aspects of peace. One of the things that surprised me most is the fact that Nagasaki has a huge Portugal's influence, especially Christianity.

Afterward, they provide us a delicious dinner and an enjoyable welcome party. Encouraged by a musical performance by students from Korea, we also presented the choreography of KIFES, which was the dance of international students during the Soka Festival last October. This initiative generated waves of engagement because immediately, representatives from all universities also decided to make an informal musical presentation on the stage, demonstrating the energy and power of youth.

In the next two days, we had several group activities coordinated by Keiko Nakamura, Associate Professor of The Research Center for Nuclear Weapon Abolition at Nagasaki University. Stimulating the power of our imagination, she conducted a sensorial empathy experience to transform the 13,880 of nuclear warheads in deep feelings, not only numbers. Nakamura Sensei made us humanize the numbers when she dropped thousands of little stones in a tin box to represent each atomic bomb in the world. We felt how much a bomb can destroy everything; destroy the destiny of thousands of people. It made me more aware of this issue and gave me a sense of urgency to fight against nuclear arms. The discussion after this experience was mainly about "why are there still nuclear weapons in the world?".

On the second day at lunch, we interviewed each other in small groups to understand the differences and similarities of peace-education around the world. A standard view amongst interviewees was that nuclear weapons are only approached at school when history teachers explain the context of World War II. However, we noticed something interesting from schools in Nagasaki, Hiroshima, and Okinawa. They promote education for peace with reflections, visitations, and activities about the dangers of the atomic bomb as a current problem, not just a historical fact.

On the third day, we had the last presentation about "what can we do to achieve a world free from nuclear weapons?". Many different solutions and brilliant ideas came across the interaction between participants. My team group created a hashtag movement called #NoNukeJustLook for social media platforms to spread the awareness of nuclear weapons (also known as nuke). Besides that, each participant was encouraged to dedicate efforts and develop a personal peace-project during 2020 with their support. Let's make peace together! 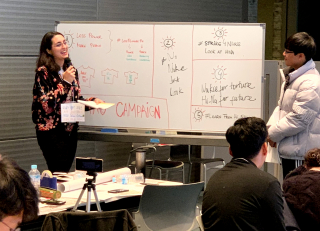 Firstly, Professor Burke-Gaffney defined peace as "the respect for diversity and cooperation based on common interests". Such a definition opened my eyes to think more broadly about how deep the roots of nuclear weapons are. I used to assume that peace was synonymous with the nuclear weapons ban. But, during the discussion, I learned that behind this problem are severe economic conflicts and power interests that must be considered.

As a visual designer and peace studies student, my determination is to apply this knowledge using my innovative skills like design thinking to create impact. Since I returned from Nagasaki, I have been working hard to transform my idea into a real project. My purpose is to design a virtual reality glasses with an atomic bomb experience. I believe that the virtual reality approach has the potential to create empathy by opening the people’s eyes to someone else's perspective. Education through immersive action creates awareness and allows people to literally walk a mile in another person's shoes.

Lastly, what intrigues me is the fact that UN Sustainable Development Goals do not mention nuclear weapons abolition as a target or goal. As an SDGs advocate, this event inspired me to understand the reasons for this exclusion since atomic bombs provoke catastrophic humanitarian consequences.

Transforming the participant's knowledge into action. The founder of Soka University, who has been fighting for the end of nuclear weapons, declared: "This common goal - the enactment of a treaty for the prohibition of nuclear weapons - can only be achieved by strengthening the solidarity of citizens." (Daisaku Ikeda, Peace Proposal 2000, p. 17, "Peace through Dialogue: A Time to Talk Thoughts on a Culture of Peace")
I firmly believe that the results and findings of the conference should be promoted by the participants with their friends, the university, and their community. Here at Soka University, for instance, we five determined to organize an open workshop in March to share the main points we had learned during the conference in Nagasaki.
Also, the organizers created a page on Facebook, where everyone can see the development of the student's initiatives during 2020:
https://www.facebook.com/YCN2020