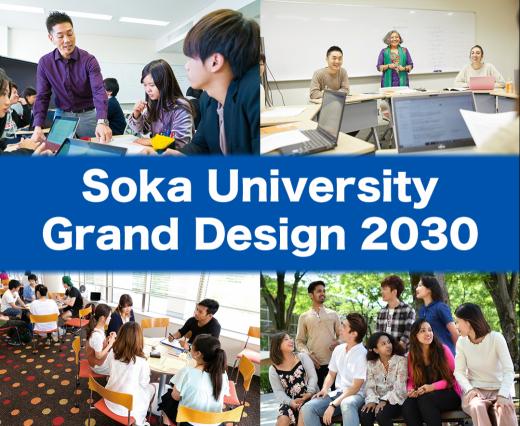 Since its founding in 1971, Soka University has been developing through continuous reforms toward the realization of the founding principles set forth by the founder Daisaku Ikeda. In the Soka University Grand Design announced in 2010, we adopted the goal of becoming a “university that fosters creative individuals based on the founding principles.” Over the past 10 years, we have realized the globalization of the campus symbolized by being selected for the Top Global University Project and enhancement of the learning environment such as the construction of the Global Square as well as sending out graduates who play active roles in various fields both nationally and internationally.

In the initiative aimed for 2030, we adopted the theme of “a university that fosters global citizens that can create value,” with concepts such as “global citizenship education,” “achievement of the SDGs,” and “creation of a diverse campus.”

In order to continue being a university that creates new values for society while valuing the philosophies and traditions of the founding principles and as a university for the students, Soka University will advance towards 2030, the 100th anniversary of the publication of the “The System of Value-Creating Pedagogy.”

We have launched a special website for the “Soka University Grand Design 2021-2030.” Please see the following webpage for an overview of the plan. We are preparing detailed plans such as the numerical targets for each initiative and will be implementing them from the AY2021.