Chairperson of the Board of Trustees 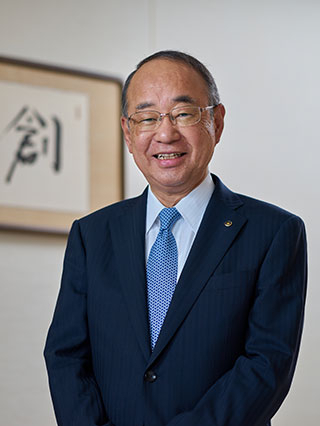 I am determined to do my utmost for the development of Soka University, looking toward the 40th -- and beyond that to the 50th -- anniversary of the university's founding. My guiding principle in this is the commitment of "students first," a commitment that has been at the heart of this institution since its inception.

The 21st century dawned with much hope and expectation on the part of the people of the world. However, turmoil and an increasing sense of helplessness have become a pervasive reality in both the educational community and society as a whole. What is most required at this critical juncture in history is the emergence of individuals capable of shaping a new social reality, one based on peace. It is my belief, therefore, that those engaged in higher education, whose responsibility it is to produce peoplepeople of talent, shoulder a grave responsibility.

The unchanging mission of Soka University is to foster and develop individuals capable of creating new values in whichever arena they are engaged; individuals who, irrespective of the age, embody the founding spirit of the university, as laid out by Dr. Daisaku Ikeda, the founder. Dr. Ikeda has remarked that Soka University is now in its second pioneering period, one in which it must open up a "golden age" of value-creating education. In order to help usher in such an age, I am resolved to create, through the united efforts of the faculty, administration and student body, a new history within Soka University.

Chairperson of the Board of Trustees - Yasunori Tashiro