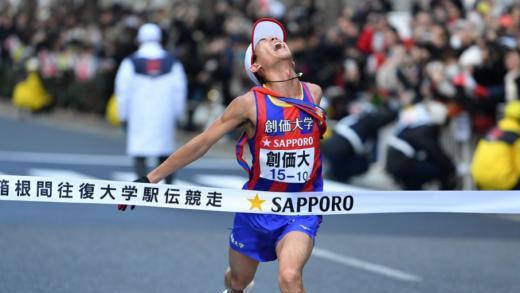 The 96th Hakone Ekiden: Soka University’s Ekiden Team Achieves 9th Place and Will Be Seeded in Next Year’s Race for the First Time, While Runner Shimazu Achieves a New Record at Section 10!

On January 3 (Friday), the five stages of the second half race in the 96th Hakone Ekiden (Tokyo-Hakone Round-Trip College Ekiden Race) took place. The second-day distance is 109.6 km, from Hakone, Kanagawa to Otemachi, Tokyo. Soka University’s Ekiden Team will be seeded next year for the first time, ending at 9th place (7th place in the first half race and 9th place in the second half race). Yudai Shimazu (Faculty of Letters, sophomore) ran remarkably in Section 10, achieving a new record for that section.

The Soka University’s team, which was at 7th place in the first-half race, began the second half race 6 minutes and 18 seconds behind Aoyama Gakuin University, which was in 1st place.
Jun Kasai from Section 6 (Faculty of Letters, freshman) ran through the mountain course, at 840 meters in elevation, as he endured pain in his leg.
This was followed by Kira Migita at Section 7 (Faculty of Business Administration, junior) who entered the Hiratsuka relay station at 11th place, ran with persistence, is deeply appreciative of the effort shown by his teammates, who supported him as well.
Hiromi Suzuki, who received the sash as the team chased after the 10th-place Chuo Gakuin University with a difference of 37 seconds, shrank the difference to 7 seconds, also at one point surpassing the competitor.
Yoshiaki Ishizu (Faculty of Letters, junior) in Section 9 followed the momentum gained by Suzuki and with composure ran through Totsuka and Tsurumi, passing the sash to Shimazu for Section 10.
Shimazu took the offensive from the beginning and shrank the difference of 55 seconds with Chuo Gakuin University, surpassing them at the 9.5 km point, emerging within 10th place to be seeded in the next year’s race. He did not slow down after that, also surpassing a runner from Toyo University, and brought us in at 9th place as a team, finishing the section at 1 hour, 8 minutes, 40 seconds, marking a new record.

The Soka University’s Ekiden Team was united in this relay of 217.1 km in total ending at 10 hours, 58 minutes, 17 seconds, significantly surpassing the last race (93rd race), when they ended at 11 hours, 20 minutes, 37 seconds.

Coach Kazutaka Enoki spoke powerfully in front of those that gathered to support the team, saying: “Thank you very much for cheering us on from the early morning over these two days. In the first-half race, Yonemitsu created a great flow in Section 1, and all runners passed on the sash with persistence in their running. In the second-half race, at one point, we lost the right to be seeded next year, but everyone manifested their full strengths, and with the last runner, Shimazu, running with confidence and pushing up our ranking, we will be seeded in next year’s race. The runners’ strong determination to give their all culminated in this kind of result. I would like to express my sincere appreciation to everyone that supported us.”

Captain Yosuke Tsukidate expressed his appreciation after the race, saying: “Coming in at 9th place, which was our goal, we will be seeded next year. Starting from Yonemitsu at Section 1, who won a Section Award, and with Shimazu remarkably scoring a historic record, we were able to achieve our goal. It was not only the efforts made by the 10 of us that ran the race, but it is thanks to all the members and everyone that supported us that we were able to achieve our goal.”

Board of Trustee Chair Yasunori Tashiro shared: “I would like to relay my heartfelt congratulations on achieving the right to be seeded in the next year’s race, which was your goal. I would also like to express my deepest appreciation to the runners, staff, managers, and everyone that provided support. Also, thank you very much to everyone that powerfully cheered from the roadside in the cold weather.”

Comments from the runners that ran the second-half race are as follows.
Section 6 runner, Jun Kasai shared: “My seniors encouraged me by saying, ‘Please simply enjoy running,’ so I was able to stand on the starting line for the second half race without pressure. As Section 6 is downhill, I ran thinking of chasing the runners ahead of me. The runners around me were running fast, and I really felt the high standards of the Hakone Ekiden. In the latter half, I felt pain in my feet each time I made a step forward, but I was able to get through the race, thanks to the cheering from the roadsides. I want to definitely come back to Hakone after showing further growth."

Section 7 runner, Kira Migita shared: “I am glad that, in the first half, I was able to chase after the runners in front of me. In the latter half, it was tough catching up with runners from other universities, but I heard the voice ‘Let’s hand off the sash within a range that will be seeded next year!’ from the coach’s car, and I was able to remain persistent. I handed the sash to Section 8 runner Hiromi Suzuki as though entrusting him with the responsibility to gain the right to be seeded for next year. It was my first time to participate in the Hakone Ekiden, and the many cheers from the roadsides empowered me.”

Section 8 runner, Hiromi Suzuki shared: “When I received the sash from Migita, it was approximately at a 40-second difference with Chuo Gakuin University, which was in 10th place. As I could still see their runner up ahead, I was able to start running in a favorable position. Last year, I participated as a selected member by the University Association, but this time, I felt the joy of passing the sash to my teammate. I ran thinking about the feelings of the members of the Ekiden Team, who were supporting us behind the scenes. The cheering from the roadsides, saying, ‘Go Hiromi!’ really helped me. Thank you so much for your support.”

Section 9 runner, Yoshiaki Ishizu shared: “The start was okay, but I regretted that the distance between me and the runner of Chuo Gakuin University, who was running before me, widened. At the end of the race, I was able to squeeze out the rest of my strength when my coach called out to me, yelling: ‘Run for your teammates, who were also striving right up to the end to enter this race!’ I passed the sash with the feeling, ‘Shimazu, I am counting on you.’ The great cheers from the roadsides and the Soka University banner helped push me forward.”

Section 10 runner, Yudai Shimazu shared: “In tandem with the other runners that passed the sash onward, I started the race with the spirit to bring forth all my strength. The fact that we achieved our goal to gain the right to be seeded next year gives me the greatest joy. As I have a problem with my eyes, known as “pigmentary degeneration of the retina,” from when I was born, it’s difficult to see my surroundings in dark places, so it was hard to train during dark winter mornings. I am glad that I was able to run in a way that can give hope to those who struggle with the same kind of illness. I plan to exert myself in my training so that, at next year’s Hakone Ekiden, I will do even better than I did today.”
Thank you very much for your wonderful support.