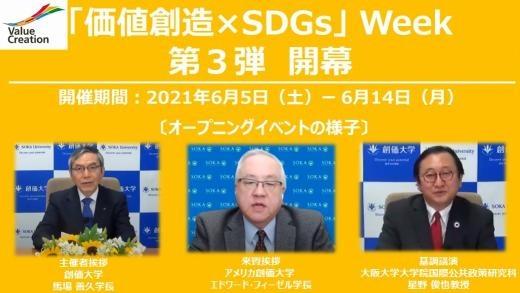 Soka University marked its 50th anniversary in April 2021. As part of its commemorative project, the university held a series of "Value Creation × SDGs" events to contribute to the promotion of SDGs set by the United Nations. The third session in the series was held online (webinar) from June 5 (Saturday) to June 14 (Monday). With the focus on SDG 4: Education, this session explores the theme of "Global Citizenship Education" and features commemorative lectures, symposiums, and joint programs with our partner universities, the University of Alcalá and Soka University of America, in addition to exhibitions by students.

The opening event on June 5, the first day of the event, saw about 1,200 participants, both individuals from Soka University and individuals from outside the university. President Yoshihisa Baba offered his greetings at the beginning of the event, saying, "This event will allow us to see the outcomes produced by the university over the past 50 years and look toward the 100th anniversary of its founding. I hope productive discussions will take place as to how to develop human resources who can contribute to solving various issues that the future global society will face and the challenges in developing such human resources."

This was followed by a video message from the President of Soka University of America Edward Feasel, and then a keynote speech by Professor Toshiya Hoshino from the Osaka School of International Public Policy, Osaka University (former ambassador and deputy permanent representative of the Permanent Mission of Japan to the United Nations).

Professor Hoshino gave a speech under the theme "The importance of global citizenship education in SDGs—How to realize 'oneness' in the post-pandemic world." He explained why the SDGs and global citizenship education are important now. He proposed that we all practice the "three oneness." They are "oneness with people—you and all the others in the world are one," "oneness with the earth—you and the earth's ecosystem are one" and "oneness with the future—your future era and you are one." He called on the participants to put the “three oneness” into practice because if every individual takes issues as their personal problem and learns to connect with other people, the earth, and the future, we can change the world.