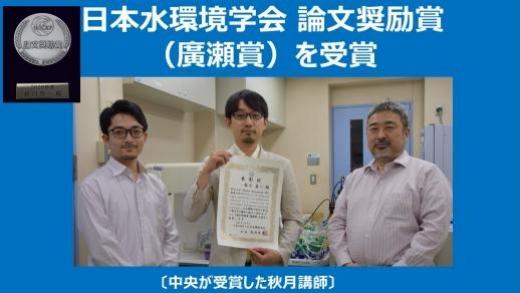 Shinichi Akizuki, a Soka University Lecturer of the Institute of Plankton Eco-engineering, Receives the “JSWE Paper Award for Young Researchers” from the Japanese Society on Water Environment

Purposes of the JSWE’s activities include academic surveys, research, and the promulgation of knowledge in fields related to water environments, contribution to preserve and create healthy water environments, and services towards academic and cultural development. The society currently has about 2,100 members. The JSWE Paper Award for Young Researchers is an award given to promising individuals whose research on the water environment is original.

The paper for which Mr. Akizuki won the JSWE Paper Award for Young Researchers is titled "Effects of different light conditions on ammonium removal in a consortium of microalgae and partial nitrifying granules," and is published in the Water Research journal. The paper focused on the coexisting system between microalgae and partial nitrifying granules as an energy-efficient treatment method for wastewater containing ammonia. It evaluated the effect of the differences in light intensity on the function of the coexisting system. The originality was particularly recognized in which the finding indicated that the path contributing to ammonia removal (nitrification reaction or ingestion by microalgae) depends more on the daily cumulative radiation of light than the light intensity, and also estimated the amount of the daily cumulative light irradiation that allows effective and energy-efficient ammonia removal.

Mr. Akizuki commented after receiving the award, "I am extremely honored to receive the JSWE Paper Award for Young Researchers from the Japan Society on Water Environment. While wastewater treatment using the coexisting system of microalgae and bacteria has been known for a long time, knowledge has been minimal when it comes to the coexisting system involving partial nitrifying granules with the focus on ammonia removal. In this paper, we evaluated the effects of light intensity and the duration of irradiation on the performance of the coexisting system and estimated the condition range that allows stable treatment performance. Wastewater treatment technology using light like this method is effective in the "sunbelt" regions, where sunlight is abundant such as Central and South America, Southeast Asia, and Africa. In the future, we would like to develop this research further to conduct applied research in outdoor environments, with the cooperation of researchers from Mexico, Ethiopia, and other countries who have experience in joint research in this area. Lastly, I would like to express my sincere gratitude to Professor Tatsuki Toda and Assistant Professor Masatoshi Kishi of Soka University, for their advice and cooperation as co-authors, and Professor Germán Cuevas-Rodríguez of the University of Guanajuato, Mexico."