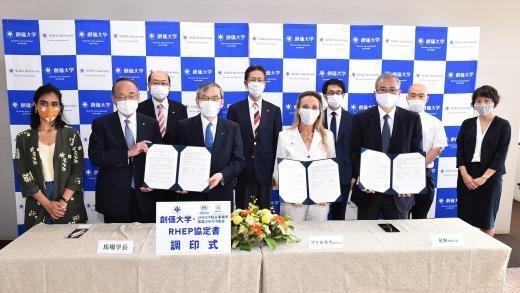 On Monday, June 21, 2021, the United Nations High Commissioner for Refugees (UNHCR) Representation in Japan, Japan for UNHCR (J4U), and Soka University held a ceremony for signing an agreement on the graduate school admission system for refugee students based on recommendations at the Global Square. Soka University Board of Trustees Chair Yasunori Tashiro, President Yoshihisa Baba, and Graduate School Dean Minoru Koide welcomed the guests. The attendants from the UNHCR Representation in Japan were Representative Karen Farkas, Deputy Representative Toshitsuki Kawauchi, and Senior Protection Assistant Rei Kasai. The attendants from J4U were Executive Director Mamoru Hoshino and Kohei Amanuma, who are in charge of the Refugee Higher Education Program (RHEP) and public relations and education projects.

The RHEP aims to provide opportunities for refugees living in Japanese society to have higher education. Soka University concluded an agreement on RHEP in 2016, and since April 2017, has accepted one undergraduate student per year as a scholarship student. These students are exempted from tuition for four years. Also, living cost allowances are provided.

The university wants to further expand the opportunities of refugees for higher education, which will help the university foster human resources that can contribute to peacebuilding and social development in the international community. With the signing of the agreement in this ceremony, the Soka University's Graduate School of International Peace Studies (master's program) will start accepting one graduate student as a scholarship student every year from the academic year 2022.

At the signing ceremony, Ms. Farkas, the Representative of UNHCR Japan, shared her thoughts and expectations for Soka University's support for refugees. "The environment for refugees to learn among Japanese students is not yet established and still needs a lot of work. That's why I would like to express my wholehearted gratitude to Soka University for creating educational opportunities for refugees. Educational and employment support is essential for refugee-background students to rebuild their lives, and peace is the key for refugees to return to their own countries. I am excited to sign this agreement with Soka University, which put the philosophy of 'Be a fortress for the peace of humankind' into practice.”

Following the speech by Ms. Farkas, President Baba commented, "This is the second agreement we have concluded with UNHCR. We currently have students from Syria and various countries studying at the university, and some students who have been accepted under this program are now employed by major companies. We have also seen some Japanese Soka graduates involved in refugee assistance at the United Nations. Soka University will continue to play its part to provide support to refugees."
After the ceremony, the guests toured the Learning Commons SPACe before leaving the campus.