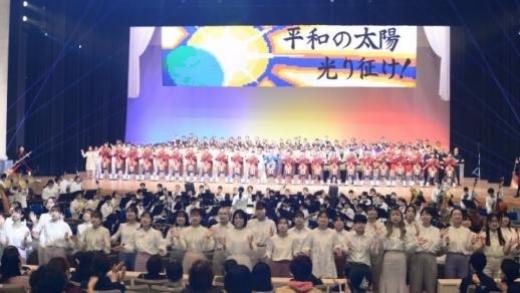 The 52nd Sodai Festival and the 38th Swan Festival held

On Saturday, October 8th, the combined 52nd Sodai Festival, and the 38th Swan Festival ceremony was held at the Ikeda Auditorium.

At the ceremony, President Masashi Suzuki gave a speech in which he introduced the concept of “peace” as an ongoing process of creating value, a condition for happiness, through the words of Dr. Betty Reardon of Teachers College, Columbia University, in the United States, and said, "Believe in your infinite potential and challenge yourself as much as you can to be open to that possibility. Also, as a global citizen who helps develop the potential of people around the world and practices value creation, please contribute to the realization of world peace.” During the celebratory performance by students, a prologue video was shown accompanied by the Pioneer Wind Orchestra, followed by a fanfare by Pride of Soka, a dance performance by D.I.CREW, and a performance by Ichariba (Okinawan Dance). Following a chorus by Soka Women’s College students, international students from all over the world performed a dance, the main video was shown, speeches were given by international students, a Soka University student chorus performed, and finally, all participants sang the student song.

Next, the Chairman of the Board of Trustees, Mr. Yasunori Tashiro read a message from the founder, Mr. Daisaku Ikeda. The founder wrote, "My heart is now dancing and singing together with my beloved Soka University and Soka Women’s College students on the Hachioji campus, the cradle of a great new culture. Congratulations on the holding of the Sodai Festival and the Swan Festival, where together with friends you experience a triumphant youth! The only way to create true peace is to change the basis of what it means to be "human". The only way for people to become stronger and wiser. In particular, if young people around the world unite their hearts and minds, this will become the hope of the peoples of the earth. The microcosm of this is undoubtedly shining here. I hope that you will encourage each other as peers who share the same aspirations for peace, hone your wisdom with vigor, and broaden your solidarity with each other."

On the following days, Sunday the 9th and Monday the 10th, the 52nd Sodai Festival and the 38th Swan Festival were held on campus, open to the public for the first time in three years. In addition to exhibitions, flea markets, an international student cafe run by international and Japanese students, events by clubs and other groups, as well as events organized by the executive committee such as the opening ceremony and the finale, were held.