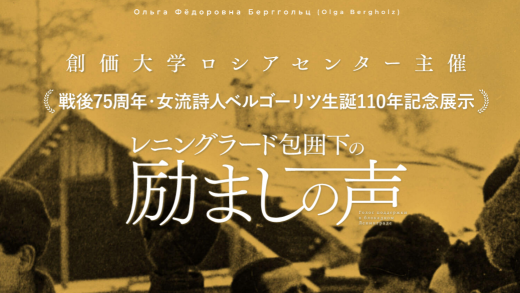 This year, which marks the 75th anniversary since the ending of WW2, and in commemorating the 110th birthday of Russian poet Olga Berggolz, Soka University Russian Center had planned to hold an exhibition at the center, focusing on the encouraging voice of this poet, which reverberated via radio throughout the city of Leningrad during its 900-day siege during WW2. However, due to COVID-19 and in order to prevent the spread of the virus, this plan was changed to an online exhibition as the very first trial.

The online exhibition was co-sponsored by Soka University Russian Center and the Federal Agency for the Commonwealth of Independent States Affairs, Compatriots Living Abroad, and International Humanitarian Cooperation (Rossotrudnichestvo) with the support of the Embassy of the Russian Federation to Japan as well as the Russkiy Mir Foundation. The special site opened in December 2020.

We hope that as many of you as possible can view this exhibit.

Theme: ”Voices of encouragement during the siege of Leningrad”

Support: The Embassy of the Russian Federation to Japan, Russkiy Mir Foundation

Note: Can be viewed online via the website of Soka University’s Faculty of Letters