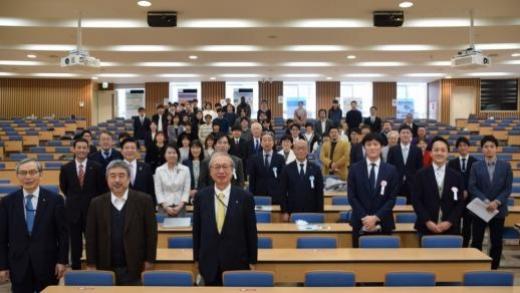 On Monday, March 21st, PLANE3T Symposium on “Interdisciplinary International Cooperation between Soka University and African Institutions Towards SDGs: Environment, Education, Health, and Business” was held in a hybrid style, both in-person and online.

Approximately 100 participants, including faculty members and students, gathered at the venue, while other attendants took part online, including the former president of Injibara University, Dr. Birhanu Belay, and an Associate Professor of Bahir Dar University, Solomon Addis, who are from the model area, Ethiopia.

Soka University’s project titled, “Research & Development of Appropriate Technology for Establishing a Sustainable, Recycling-Oriented Society in Developing Countries, and Formation of a Foundation for New Local Industries (PLANE3T Project <*1>)”, was selected as one of the “Private University Research Branding Projects” in November 2017, which is sponsored by the Ministry of Education, Culture, Sports, Science, and Technology.

In Part 1, after the greeting by the president of Soka University, Yoshihisa Baba, lectures were delivered by two guest speakers, Mr. Kosuke Hara, the former member of the Alliance Forum Development Program, and Mr. Kohei Oh, the General Manager of Motherhouse Co. & Ltd.

Then poster sessions were held by students. At the same time, undergraduates offered highly healthy cupcakes with spirulina that they made after many trials through the “PLANE3T Student Program,” which was well-received.
Part 2 began with a greeting by Dr. Belay. Professor Tatsuki Toda, the Dean of Graduate School of Science and Engineering at Soka University as well as the person in charge of the PLANE3T research project, reported PLANE3T achievements made by the Japanese side. Associate Professor Solomon Addis reported achievements made by the Ethiopian side. Then Professor Shinjiro Sato from the Faculty of Science and Engineering, Soka University, who is also the head of SATREPS-EARTH <*2> research, introduced SATREPS-EARTH. After that, the project was evaluated by Professor Syuhei Ban from The University of Shiga Prefecture, who is the chairman of a third-party evaluation committee. In the end, the vice president of Soka University as well as the responsible person for this project, Koichi Kandachi, gave a comprehensive commentary.