On July 15 (Friday), the International Culture Festival hosted by the Foreign Student Association, consisting of international students at Soka University from 42 countries and regions around the world, was held at the university’s Discovery Hall, with approximately 300 participants in attendance.

President Yoshihisa Baba, who rushed to the event to give encouragement, praised the international students for their efforts in their studies and activities on campus, stating that founder Dr. Daisaku Ikeda shared in his lecture 20 years ago at Columbia University Teachers College that the qualities necessary for global citizens are wisdom, courage, and compassion. Twenty years later, Soka University has developed into a university filled with diversity, and its students are steadily acquiring the qualities of global citizenship. He also shared that, while many students will return to their home countries this semester, he encouraged them to cherish the memories they created at Soka University and to grow into global citizens that can contribute to society.

This was followed by performances by various clubs such as an acapella band and the ROUTE dance circle, which were joined by international students. While the period for practice was brief, the performances were wonderful and excited the audience. When Ribert Loitz Koji Helgard, an international student from Denmark, gave an impromptu piano performance, the audience let out a sigh of exhilaration. In addition, international female students from the Soshun and Cosmos dormitories performed songs and dances, and the venue was filled with great excitement when the students of the Faculty of International Liberal Arts sang in chorus.

Comments from participants are as follows.

- “Interacting with international students this past month, I was able to learn about various cultures. Practicing for the event was at times tough and at other times enjoyable, but I was very happy to create eternal bonds of friendship with many international students by preparing for this event.” (Junior from the Faculty of Letters, male student)

- “Although we speak different languages, through dancing, I was able to create truly wonderful memories, forging friendship with Japanese students.” (Junior from the Faculty of Science and Engineering, male student from France)

- “Since I joined Soka University in April, already the first semester is ending, and I am surprised by how time flies. As I participated in all the events for international students held in the first semester, I feel that I myself have become more and more globalized. I want to study English more and make efforts to become a capable global citizen.” (Freshman from the Faculty of Letters, female student) 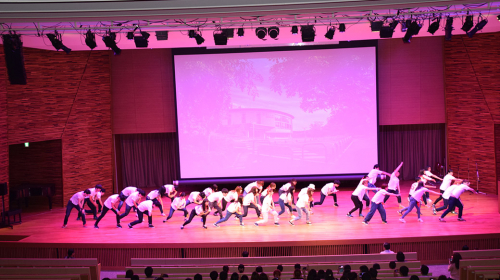 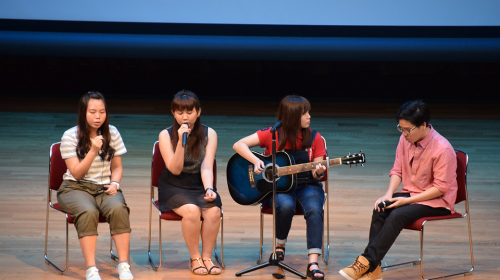 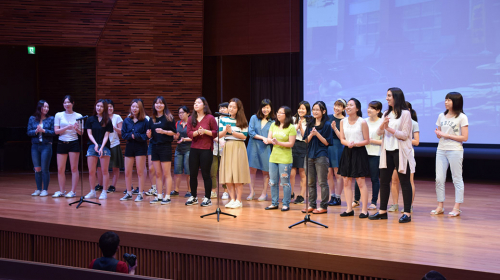