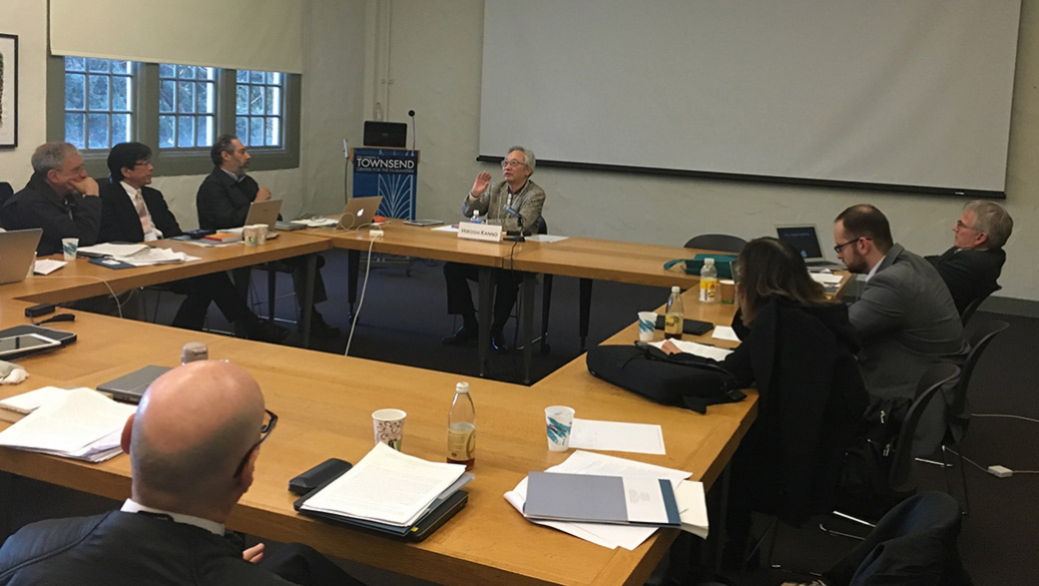 The purpose of this workshop is to create a “Nirvana Sutra” version of a teaching material series based on academic research into the Mahāyāna Mahāparinirvāṇa Sūtra so that American students can read important Buddhist scriptures. “Nirvana Sutra” is well-known for expounding that all living beings inherently possess Buddha nature and can attain enlightenment, and that the Buddha’s body is eternal. In particular, the idea of Buddha nature greatly impacted Buddhism in East Asia. This workshop was attended by 10 scholars from the United States, Germany, and Japan, and each made a presentation on a related topic.

Professor Kanno presented under the theme of “Some Perspectives on the Mahāyāna Mahāparinirvāṇa Sūtra in China during the Northern/Southern and Sui Dynasties: Focusing on the System of Doctrinal Classifications.”

An overview of Professor Kanno’s study presentation is as follows.

Upon explaining the Chinese translation of the Nirvana Sutra and its annotated edition, he shared two episodes of when the sutra was transmitted to China. “First, despite the fact that the Six Volume Nirvana Sutra translated by Fa-hsien expounded that while all living beings possess Buddha nature, icchantikas are an exception (as they have extinguished good roots and are people of disbelief), Tao-sheng ignored this theory and advocated that icchantikas can attain enlightenment, as they also possess Buddha nature in their lives. For this reason, he was banished from the capital. However, later, when the original source of the ‘Nirvana Sutra’ was transmitted, the same theory propounded by Tao-sheng was found there, proving his foresight. After ages had passed, Tao-sheng was praised as the ‘Nirvana Sage.’ Secondly, in response to a monk that advocated that the Nirvana Sutra was not expounded by the Buddha, Kumarajiva’s disciple, Seng-jui, rebutted this with his writing, Yu-i-lin. In it, he stated that although Kumarajiva was unaware of the ‘Nirvana Sutra,’ considering Kumarajiva’s daily statements, if he had been living, he would have gladly accepted the sutra.” Lastly, Professor Kanno introduced the fact that, based on Hui-kuan’s classification of Shakyamuni Buddha’s lifetime teachings into five periods, which was widely disseminated during the period of the Northern and Southern dynasties, the “Nirvana Sutra” was given the highest status as the teaching of the fifth period, expounding the eternity of Buddha nature.