On January 1 (Fri.), the “New Year Party 2016” for international students was held at Soka University’s cafeteria, New Loire. A total of 210 international students, who remained at the campus dorms over the holidays, four exchange faculties, and Board of Trustees Chair Yasunori Tashiro, President Yoshihisa Baba, Soka Women’s College President Keiko Ishikawa, and others celebrated the New Year together. This event is held every year to provide an opportunity for the international students and exchange faculties that spend New Year in Japan to experience Japanese New Year culture. After deepening exchange and enjoying traditional New Year food and warm hot pot cuisine, entertainment was provided by students from each dorm and by the staff of the International Affairs Office. The venue was filled with excitement when a lottery also took place.

The following are comments by the international students that attended the event.

“I really enjoyed the ‘New Year Party 2016’ for international students under the invitation of our founder, Dr. Ikeda. I am deeply grateful that they prepared Halal food for us Muslim students and even a lottery. I won the lottery and got a digital camera. I was so shocked; I was speechless. I could sense the founder’s sincere thoughtfulness for us. Once again, I felt so glad to have been chosen to be an exchange student at Soka University. I have only a short time left here so I want to make the most of each day.” (Exchange student from Brunei)

“It’s only been half a year since I came to Soka University, but I have already experienced so many things to remember. What touched me most was how Japanese students and exchange students from different countries are all having wonderful exchange. I will return to the Philippines soon, and today I was able to create the best memory. Thank you very much.” (Exchange student from the Philippines)

“Thank you very much for today’s invitation to this ‘New Year Party 2016’ from Dr. Ikeda. First, I was an exchange student from Hunan Normal University, but wanted to study more at Soka University, so I extended my stay here for a year and enrolled in the Undergraduate Non-Degree Program. I plan to return home in the middle of January, but I will never forget my memories at Soka University. I am really glad that I chose to come to this university as an exchange student.” (Student of the Undergraduate Non-Degree Program from China) 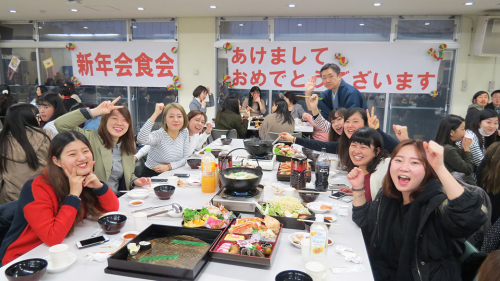 Event attended by over 200 international students 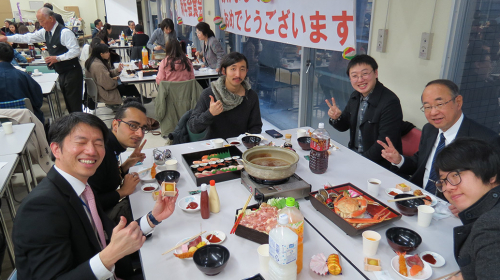 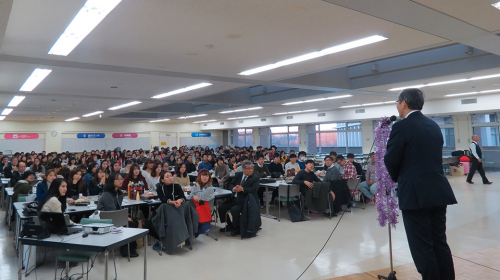 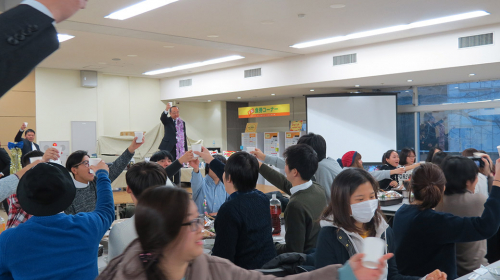 Board of Trustees Chair Yasunori Tashiro proposing a toast