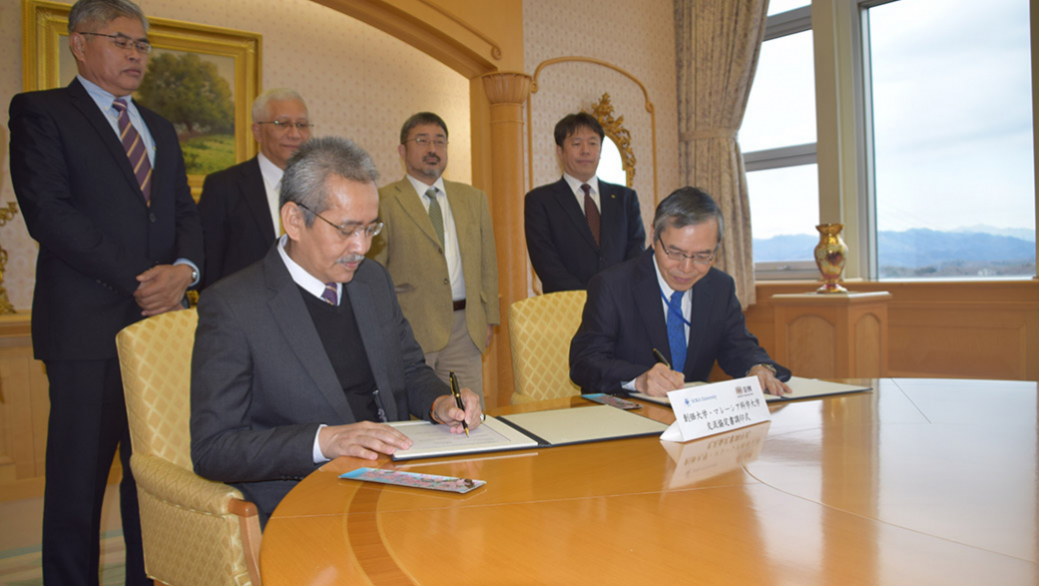 The University of Science Malaysia was founded in 1969 as the second university in the nation. It is a national university located in the city of Penang and is home to 23 schools, including schools for applied science and engineering, liberal arts, and basic science, with approximately 30,000 students.
The signing ceremony was attended by Vice-Chancellor Omar Osman and his party, who were visiting Japan, and Soka University’s President Baba, Vice President Joji Kaga, Deputy Director Ichiro Sugimoto of the International Affairs Office, and Professor Tatsuki Toda of the Faculty of Science and Engineering, who is carrying out a joint research with the University of Science Malaysia.
At the signing, Vice-Chancellor Osman shared his joy of reaching an academic exchange agreement with Soka University, which was also chosen to take part in the Top Global University Project, titled “Super Global University,” by Japan’s Ministry of Education, Culture, Sports, Science and Technology. He shared his hopes to actively conduct exchanges among students, including via exchange student programs, research activities, and pluralistic exchanges related to peace and culture.

With this, the total number of universities with which Soka University has signed an exchange agreement is 178 in 52 countries and regions around the world.