A total of 26 students from Malaysia’s Universiti Tunku Abdul Rahman stayed at Soka University to attend the Japanese Language Program over the course of two weeks from May 16 to 27. This was the sixth program attended by the university’s students.

In the program, students from the Universiti Tunku Abdul Rahman, with which Soka University has an academic exchange agreement, stayed at Soka University accommodations and participated in Japanese language training. During class, the students actually interviewed Japanese students, using the Japanese language skills that they acquired through the program. Students were also exposed to Japanese culture and traditions, including through tours to Kamakura. They also participated in an exchange gathering with students of the Soka University Southeast Asian Study Club, where they exchanged views with Japanese students. On May 27, the program’s completion ceremony and a reception took place. At the ceremony, all the students gave a speech in Japanese. Accompanying staff shared that the students created lifelong memories through the fulfilling program. Deputy Director Shinjiro Sato of the International Affairs Office presented completion certificates to the students. He also sent words of encouragement, praising the students’ two-week-long efforts and stating that the time will come when what they learned at Soka University and the friendships that they have formed will prove to be helpful.
President Yoshihisa Baba attended the reception held after the ceremony and shared with the students that the purpose of Soka University is to bring forth the hidden strength in each student and to foster them toward becoming capable individuals that can contribute to society. He also shared that while their stay was brief, they are now official Soka University students, and invited them to come back to the university any time.

The following are comments from the students that participated in the program.

“It was the first time for me to study Japanese. The teachers were very kind and taught with passion. I will never forget the experience of this short-term program.” (Male student)

“I was happy interviewing Japanese students and having exchanges with them. Everyone was kind, and I was able to make many friends.” (Female student) 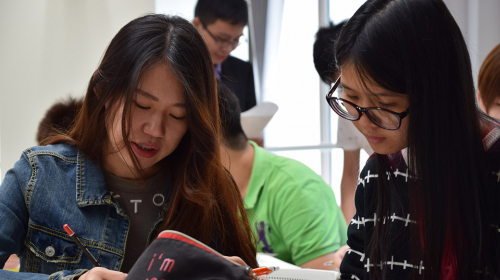