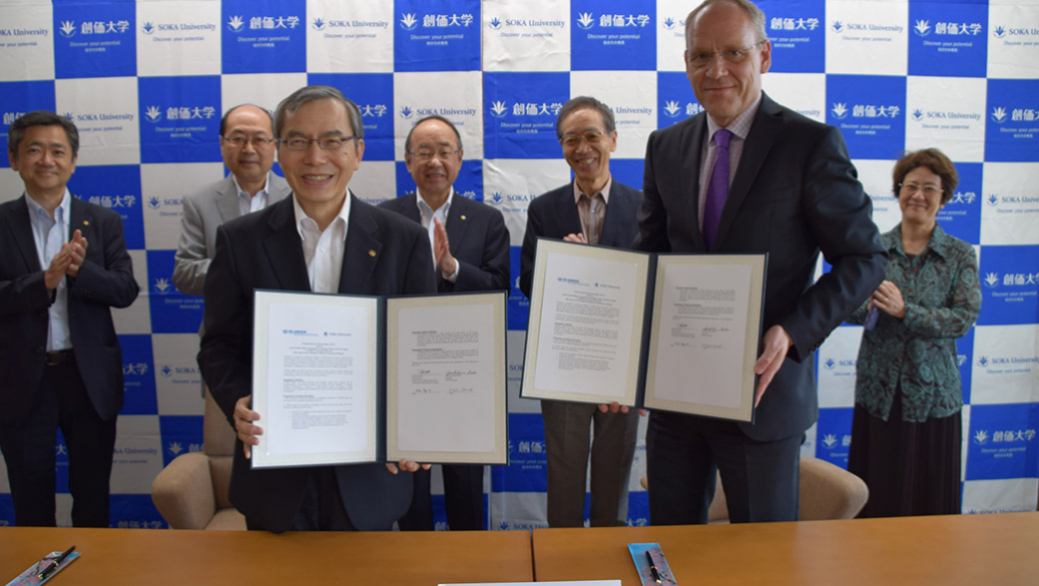 On May 26 (Thursday), a signing ceremony between the United Nations High Commissioner for Refugees (UNHCR) and Soka University for the “Refugee Higher Education Program” took place at the university’s Global Square. This was attended by Mr. Dirk Hebecker (the UNHCR’s representative in Japan), Deputy Representative Ms. Naoko Obi, and Protection Assistant Mr. Satoru Miyazawa (from the UNHCR Japan's Protection Unit), along with Executive Director Mr. Saburo Takizawa and Ms. Kyoko Izumida from the Japan Association for the UNHCR, who were welcomed by Soka University’s Board of Trustees Chair Yasunori Tashiro and President Yoshihisa Baba.

The purpose of the program is to provide opportunities of higher education to refugees living in Japanese society. To date, 37 students from Myanmar, Vietnam, Cambodia, and Iran have studied at universities in Japan, working at Japanese corporations, or international institutions after graduation. In Japan, Kwansei Gakuin University, Aoyama Gakuin University, Meiji University, and Tsuda College are in cooperation with the UNHCR, providing opportunities for college education. Soka University will also begin accepting students from April 2017.

On the occasion of the signing ceremony, Representative Hebecker said that he felt a profound connection between Soka University and the program when he learned of the university’s founding principle, “Be a fortress for the peace of humankind.” He also said that with this agreement, it became possible for a total of eight refugees to receive higher education in Japan. He also shared the announcement made by the Japanese government to accept 150 refugees from Syria. Mr. Hebecker shared his hopes that the partnership will serve as a model for advanced nations, and while communicating with cooperating universities, he would like to provide opportunities of higher education to many refugees.

This was followed by words by President Baba, who shared that each student possesses unlimited potential and that the mission of Soka University is to help reveal that potential. He shared his hopes that, with the signing of the agreement and with refugees being able to study at Soka University, the university will be able to provide education so that they can bring out their potential and contribute to the world.
After the ceremony, the party toured the Learning Cosmos SPACe, guided by student staff, before leaving campus.

In cooperation with the UNHCR, Soka University will engage in the following. 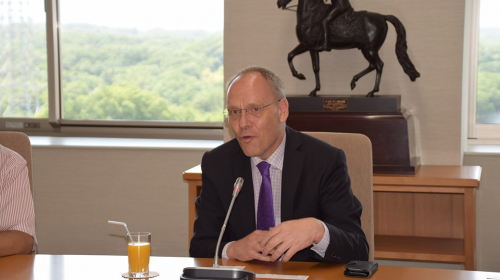