On May 20 (Friday), Associate Dean Rabbi Abraham Cooper of the Simon Wiesenthal Center visited Soka University and delivered a lecture titled, “The Courage to Remember: Expectations on Youth,” at the Learning Arena in the Learning Commons SPACe.

The Simon Wiesenthal Center is an international human rights organization based in the United States, and co-sponsored “The Courage to Remember: The Holocaust 1939-1945 — The Bravery of Anne Frank & Chiune Sugihara” exhibition together with Soka University. The exhibit was shown in Ikebukuro last year (2015) and in Hiroshima and at Soka University this year.

For a quarter of a century, Associate Dean Cooper has supervised international social issues, which the Simon Wiesenthal Center is engaged in, including global anti-Semitism, the war crimes of the Nazis and compensation issues, extremists, and tolerance education. In particular, he is widely recognized as a pioneer and international authority in the field of digital hate and the Internet.

Mr. Cooper, who met with President Yoshihisa Baba and others before the lecture, shared how delighted he was to hear the great success of the exhibition held in Ikebukuro, Hiroshima, and at Soka University. He expressed his sincere appreciation for the efforts made by Soka University. He also said that he read many comments by viewers of the exhibit and was happy to know how deeply people sympathized with the contents. He also shared that an acquaintance asked him what changes he has witnessed in Japan in the last 30 years, as he has been visiting the country since 1985, to which he replied by saying that, back then, while Mr. Chiune Sugihara was a hero for the Jewish people, Japanese people did not know about him. Mr. Sugihara saved many people, going against the government’s will. Mr. Cooper explained that later Mr. Sugihara was removed from his position and “erased from history.” However, 22 years ago, with the dedication of everyone at Soka University, the exhibition titled, “The Courage to Remember: Anne Frank and the Holocaust,” was held at the Tokyo Metropolitan Government Building. This time, too, the exhibition was visited and viewed by many people. Mr. Cooper said that today, when people see him, they start the conversation with the topic of Mr. Sugihara, and that this was a wonderful achievement. He also shared his conviction that the message of the Holocaust, which the Simon Wiesenthal Center wishes to convey, will further attract many more people and will continue to be transmitted.

This was followed by his lecture at the Learning Arena, which was attended by approximately 40 students, including those of the GCP (Global Citizenship Program). The lecture and a question & answer session were conducted in English.

In the lecture, Mr. Cooper shared four points that can be learned from the tragic events of the past, including the World War II: “The importance of critical thinking,” not to confuse “knowledge and morals,” “understanding the loss of humanity,” and the “effects of hate speech.” He called out to the students to learn from the truths of history and to become individuals who can build peace.

During the question & answer session after the lecture, students asked questions such as “What is the impact of President Obama’s visit to Hiroshima?” “How can people make courageous decisions like Mr. Sugihara did?” and “How can diversity be realized?” Mr. Cooper responded by sharing his own experiences. It was almost like he was having a heart-to-heart dialogue with each person. 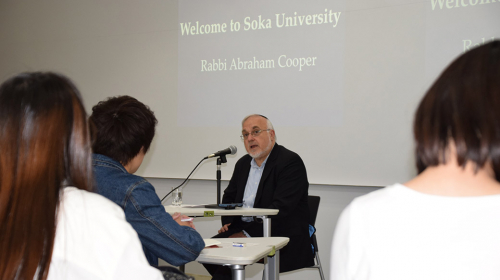 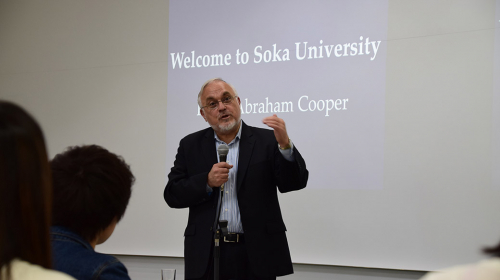 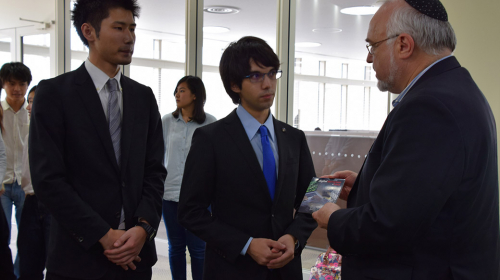