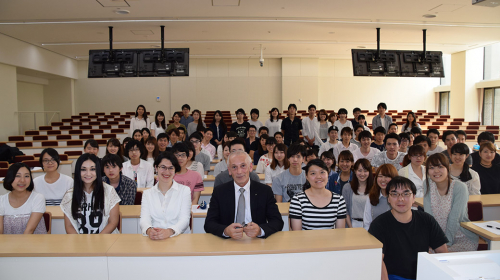 On June 10, His Excellency Georgi Vassilev, Ambassador of the Republic of Bulgaria to Japan, visited the Soka University campus and delivered a commemorative lecture to representatives of the school’s student body, staff and faculty.

Ambassador Vassilev toured a number of facilities and met with Soka students from Japan who either studied in Bulgaria or are preparing to go there. He then delivered “Bulgaria and Japan: Peace and Friendship of Our People” during a Peace Studies class.

In his lecture, Ambassador Vassilev provided a short overview of the history of Bulgaria as well as its relationship with Japan, which he described as being unique. For example, Bulgaria has the largest number of citizens studying Japanese than any other country in Europe, while Sofia University has maintained strong academic ties with Soka University for more than 30 years.

Among the members of the Bulgarian delegation was Cultural Affairs Officer Illiyana Kostova, who served as his interpreter. Ms. Kostova studied at Soka for one year as an exchange student from Sofia University in 1999.