Thammasat University ranks among the oldest and most prestigious national institutes of higher learning in Thailand. Formally founded in 1934, it has since graduated more than 300,000 undergraduate and graduate students, many of whom had gone on to become leading figures in politics and government.

In his speech, Soka University President Yoshihisa Baba encouraged the graduates to draw upon the inspiration and creativity they developed as Soka students to face and surmount every challenge they may encounter in life.

In her speech, Soka Women’s College President Keiko Ishikawa stressed that more than ever, this mercurial world is in need of creative individuals who have honed their innovative abilities and envision alternative possibilities. She urged the graduates to continue forging a diverse, closeknit community of women as they pressed onward, never giving up on themselves or on life.

In his address, President of Thailand’s Thammasat University Council Noranit Setabutr emphasized the importance of possessing a global network of friends from across world. “Building friendships with people from different countries is what creates world peace,” he said. Expressing high hopes for the graduates, he encouraged them to never lose sight of their lofty ideals as leaders of peace and to remain confident that their steady efforts, no matter how modest, would add new chapters to the proud history of their alma mater.

Selected students were also given awards in recognition of their academic excellence and contributions to campus activities.

In his message of felicitations read by proxy, university founder Daisaku Ikeda wrote, “Soka Education is about to enter a new golden age, and you are the young standard bearers poised to take flight, opening the gates to this new era.” He offered the graduates three guidelines with which to lead their lives: the first, to stand as “a beacon of hope and justice” for all; the second, to be drivers in the creation of a “century of dignity”; and thirdly, to adorn their lives with “indomitable triumph.” 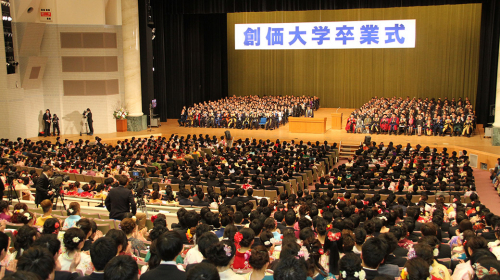