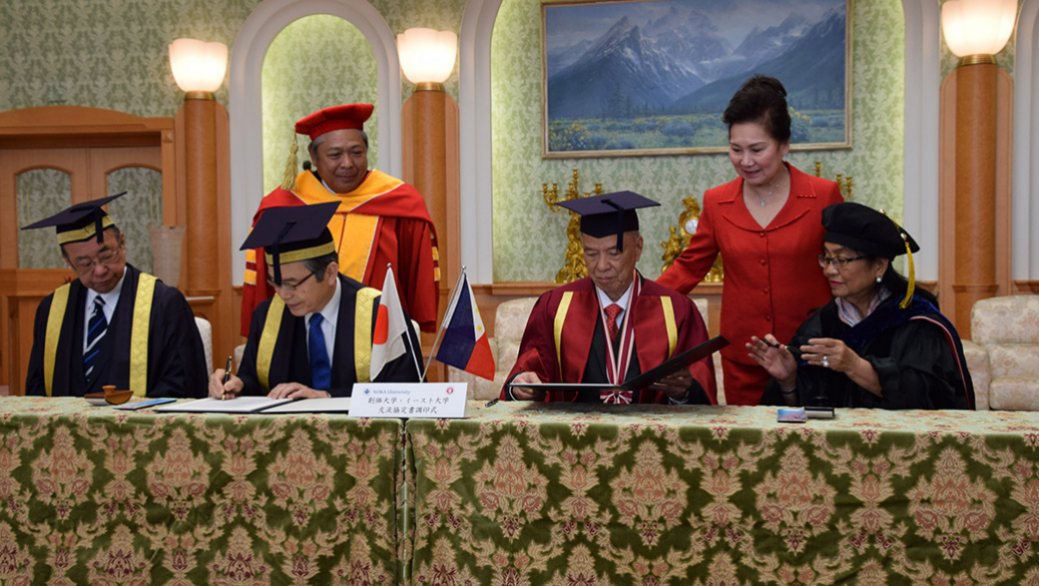 On March 7, Soka University signed a a new academic exchange agreement with the University of the East (UE) in the Philippines. The signing ceremony, held at Soka University, was attended by UE Chairman of the Board and Chief Executive Officer Lucio Tan; Vice Chairman Jaime J. Bautista; President Dr. Ester Albano-Garcia; Chancellor Linda P. Santiago of the Manila campus; and Chancellor Zosimo M. Battad of the Caloocan campus. They were welcomed by Soka University Board of Trustees Chairperson Yasunori Tashiro, President Yoshihisa Baba, exchange students from the Philippines and students of the South Asian Research Group.

The prestigious UE has three campuses, all of which are located in the National Capital region. When it was founded in 1946, 110 students were enrolled; today, there are 28,000 undergraduates studying there.

Soka first signed an academic exchange agreement with the university in 2012, and in 2014, UE presented Soka founder Daisaku Ikeda with an honorary doctorate in the humanities. This new agreement includes plans to expand the quota of exchange students from both universities, the holding of symposiums and enhancing the parameters of joint research.