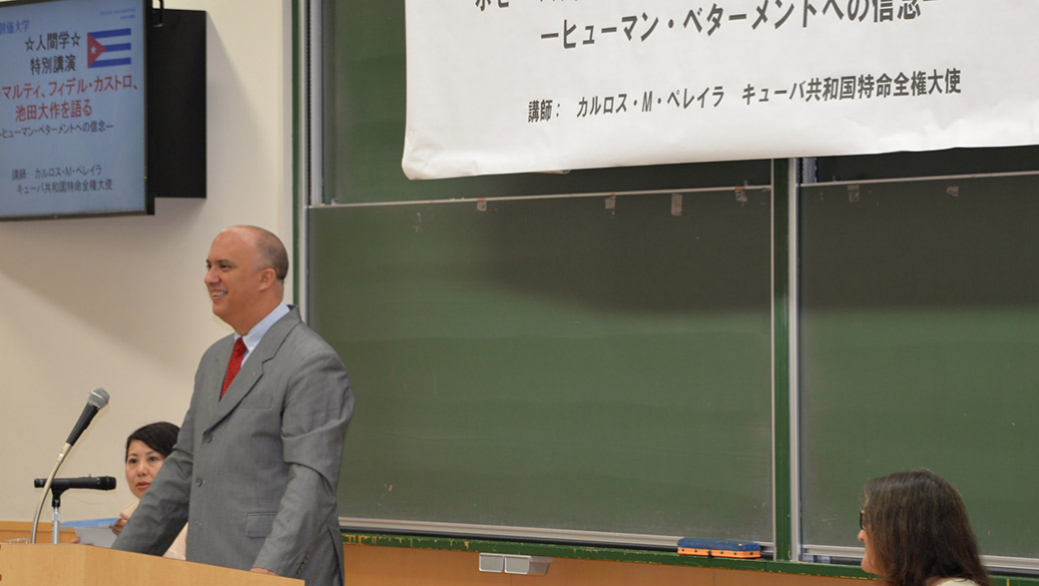 On May 11, His Excellency Carlos Miguel Pereira Hernández, Ambassador Extraordinary and Plenipotentiary for the Republic of Cuba to Japan, gave a special lecture as part of a Humanities course at Soka University’s Faculty of Literature.

His talk, titled “The moral quest for human betterment as discussed by José Martí, Fidel Castro and Daisaku Ikeda," centered on the principles shared by the Cuban revolutionary José Martí and Soka University founder Daisaku Ikeda, as well as the history of exchange between Ikeda and the late former Cuban President Fidel Castro. Ambassador Hernández expressed his hopes for the students to learn from such individuals who have consistently taken action to build a peaceful society, to continue asking themselves how they too can contribute to peacebuilding, and to persist in strengthening their capacity as individuals. A Q&A session followed the lecture.

“What makes us human?”—Approaching this question from a holistic perspective, the Humanities course at Soka University has been inviting notable individuals from various fields to offer their insights. Past guests have included Agnes Chan, a singer, peace activist and professor of education; Kaho Shimada, Japanese singer, musical theater actress and Osaka University of Arts professor; and Chieko Furukawa, author of a biographical novel about a seminal Japanese female entrepreneur, which, in recent years, was popularized through a serial drama on NHK called Asa ga kita.