Three Soka University students participated in the Ship for World Youth Leaders (SWY) program, an international youth exchange initiative for young global leaders this is sponsored by the Cabinet Office of the Japanese Government. The students who attended were Hideo Ohashi, a third-year law student, Chiharu Sakaguchi, a third-year economics student, and Sakura Sugiyama, also a third-year student studying economics.

By providing various workshops and opportunities for cross-cultural exchange, SWY aims to cultivate leadership and a deeper sense of international awareness among its participants. In doing so, the program hopes to foster youth who are capable of contributing to society. The program runs for over one month onshore and onboard a ship, during which which students from Japan and other countries study and discuss common issues from a global perspective. This year, the program, in its 29th term, ran from January 30 to March 4. Some 240 young people from 11 countries, including Japan, participated. For the duration of 34 days, the youth lived together and engaged in activities including giving presentations of their countries and holding discussions. They also traveled by ship to New Zealand and Fiji, where they visited national sites and interacted with local youth.

On June 11, a debriefing to recap the experience was held in Tokyo, and Soka University’s Ohashi represented the participants from Japan. In his address he talked about a course discussion that was held on the topic of responsible tourism, in which youth from differing nations and specialties, each with different experiences in society, discussed the adverse effects of the tourism industry from various angles and ways to improve it. Ohashi said that through engaging in such discussions, he was able to enhance his leadership skills and gain a broader perspective on how to approach various issues. 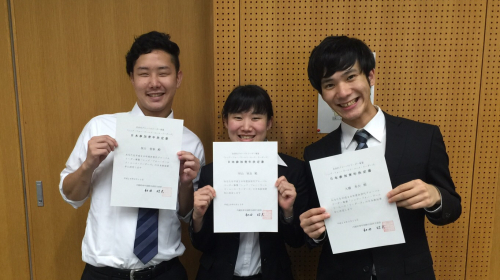 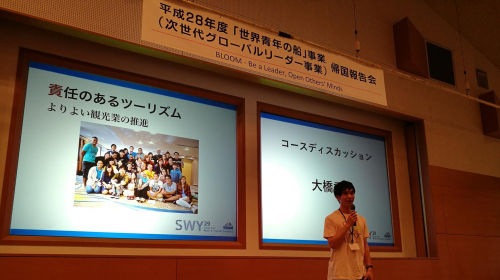