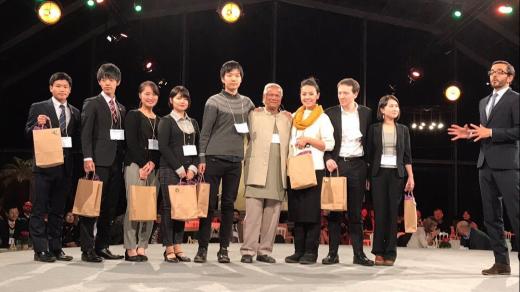 The summit was sponsored by Nobel Peace Prize laureate Prof. Muhammad Yunus and Mr. Hans Reitz of the Grameen Creative Lab and was attended by more than 1,000 people from approximately 50 countries, which included social business practitioners, supporting organizations, and students. The focus this time was mainly on issues pertaining to refugees, plastic pollution, food and its value chain, the Olympics, and health.

During the Young Challengers' & Pioneers' Meeting, which was held on the first and second days, discussions took place centering on young attendees that gathered from around the world and that are 35 years old and younger. On this occasion, the Yasuda Seminar Team ACT members announced their business plan for “Dementia Prevention Application Development,” which was their research result. On the third and fourth days, the GSBS 2017 Main Event took place, where leaders active on an international scale, including politicians, entrepreneurs, and scientists, took to the podium as speakers. Through lectures and panel discussions, the event provided a venue for dialogue and deeper understanding regarding the potential and roles of global social businesses.

A participant, Ms. Hidemi Nishimura (junior, Faculty of Business Administration) shared that, by participating in the summit, she was able to strengthen her resolve to become a capable person, one that can contribute to society through social businesses. She also said that everyone she met this time in Paris embraced the ideal and passion that they want to create a peaceful society based on win-win relationships. She expressed her hopes that, rather than sharing based on theory alone, she wants to study and gain the ability to realize a peaceful and sustainable society by taking steady action.
The members of the Yasuda Seminar Team ACT won the championship in the student category of the finals for the “Yunus & Youth Social Business Design Contest 2017” sponsored by the Kyushu University Yunus & Shiiki Social Business Research Center on October 21 (Saturday). As a result, they were granted the right to participate in GSBS 2017. 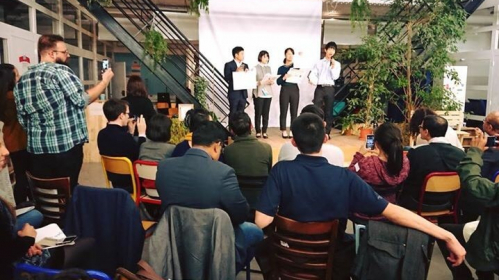