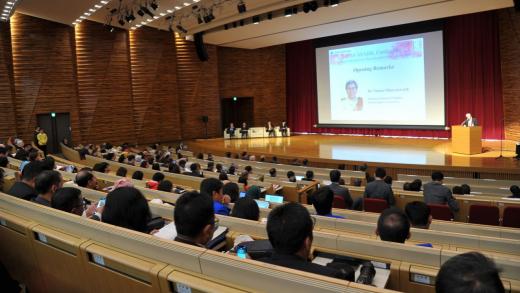 Founded in 1956, the ASAIHL aims to contribute to the advancement of education, research, and public services through mutual support among institutions of higher learning in Southeast Asia and is an international academic association with 240 member universities from 25 countries and regions around the world, not limited to Southeast Asia but also expands to Europe and North America. Five universities in Japan (Soka University, Kyoto University, Hiroshima University, Keio University, and the University of Ryukyus) are ASAIHL member universities, and this was the first time that the annual meeting was held in Japan.

The general meeting was held under the theme of “Higher Education for Diversity and Global Citizenship” as a part of Soka University’s initiatives for the “Top Global University" project initiated by Japan’s Ministry of Education, Culture, Sports, Science and Technology (MEXT) (sponsored by MEXT and Hachioji City, Japan).
On March 26, greetings were shared by the Acting President of ASAIHL, Prof. Dr. Suchatvee Suwansawat, along with the Secretary-General Dr. Ninnat Olanvoravuth and Parliamentary Vice-Minister of MEXT, H.E. Hideki Niizuma, which were followed by speeches from the keynote speakers: Vice President, Dr. Young Guk Park and Dean of Humanitas, Dr. Young-Jun Lee from Kyung Hee University, South Korea and Dr. Tsutomu Kimura, advisor and Professor Emeritus of National Institution for Academic Degrees and Quality Enhancement of Higher Education(NIAD-QE). On March 27, Prof. William Gaudelli of Teachers College, Columbia University spoke as a keynote speaker which was then followed by research presentations on higher learning from various countries and in parallel sessions. The event was attended by over 200 researchers from 19 countries and regions.