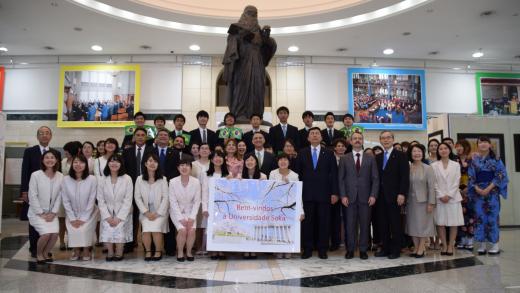 On June 13 (Wednesday), on the 17th floor of Soka University’s Main Building, an honorary doctorate was conferred upon the founder from the Federal University of Paraiba of the Federative Republic of Brazil. The ceremony was attended by Rector Margareth de Fátima Formiga Melo Diniz and her party, who were visiting Japan and welcomed by Soka University Board of Trustees Chair Yasunori Tashiro, President Yoshihisa Baba, and student representatives.

The Federal University of Paraiba was founded in 1955 and is located in João Pessoa, the capital city of Paraiba, in the northeastern part of Brazil. It has faculties in the field of medicine, education, law, tourism, information technology, agriculture, and humanistic studies. Approximately 40,000 students study at four campuses.

In her citation, Rector Diniz stated, “Representing the Federal University of Paraiba, we have the international and academic honor to confer an honorary doctorate upon Dr. Daisaku Ikeda. In addition to establishing Soka schools and universities, art museums, and research centers, Dr. Ikeda has conducted dialogue with various people, spanning socialist ideals, Christianity, and Islam, thereby connecting the East and the West. The Soka system, which aims for the growth of students as ‘whole people,’ is also introduced in Brazil. This philosophy to build a more-humanistic and more-environmentally friendly society took root in Brazil. The Federal University of Paraiba recognizes Dr. Ikeda’s achievement, becoming our honorary doctorate, and we are opening doors to promote exchanges with Soka University.”
In his words of appreciation, read on his behalf, Soka University Founder Dr. Ikeda stated, “Today, with appreciation for becoming a member of the ‘institution of higher learning of the morning sun’ of the ‘land of the morning sun,’ together with our Soka University and Soka Women’s College students, I would like to make three types of ‘morning suns’ rise; namely, the morning sun of ‘hope,’ ‘wisdom,’ and ‘solidarity.’ [Abbr.] Together with students of the Federal University of Paraiba and the youth of Brazil, let us enable the morning sun of ‘hope,’ ‘wisdom,’ and ‘solidarity’ to rise daily like a relay race, and widely and brightly illuminate the future of this Earth with the light of peace and humanity.”