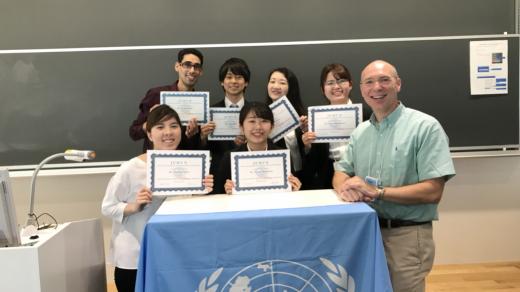 In this event, each student represents a country and discusses international issues. The aim is to foster globally minded and capable individuals that can deeply understand various issues in an international society.
The event this time was held over the course of three days and was attended by 290 students from 29 universities in 23 countries, along with 52 students from 12 high schools and various other schools. Under the theme of “Healthy Not Hungry” (i.e., referring to a world with zero hunger and good health for all by 2030), discussions were held on related topics via five groups, and a lecture was also delivered.

Comments from participating Soka University students are as follows:
“I had deep discussions with students from other universities as well as with exchange students regarding health education in the Asia-Pacific region. During the three-day session, we created a model for ‘healthy schools,’ where children can learn in a healthy manner and where schools can serve as bases for the promotion of health, reflecting on the issues that developing nations encounter in these regions. Participating in this event allowed me to make full use of my English skill as cultivated in the GCP. I was also able to actively facilitate discussion, fully utilizing what I have learned in college.” - Mr. Taiga Baba

“This being the second time to challenge myself in this event, I had the goal to actively, instead of passively, guide the conference. During the sessions, I was able to initiate a topic and facilitate discussion, thus I was able to achieve that goal. I also felt that the experience of treaty negotiations using the actual rules of UN conferences will come in handy in my work as a diplomat, which is my future dream. I had the wonderful surprise of seeing a friend that I met at last year’s conference, and it was a wonderful opportunity, creating new bonds of friendship with students from Japan and around the world.” - Ms. Naomi Miyamoto

“Participating in the Japan English Model United Nations was a good experience. It was very interesting to participate in the role of a journalist, recording interviews and managing editing software. I am truly indebted to Professor Paul Horness, who recommended me to attend the conference, as well as to friends in college that taught me various things. I also enjoyed spending time with a team consisting of people of various nationalities.” - Mr. Yasshin Sabek