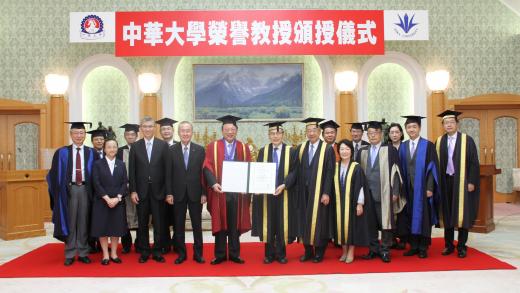 On July 30 (Monday), on the 17th floor of the Central Tower, an Honorary Professorship was conferred upon Soka University founder Dr. Daisaku Ikeda from Chung Hua University of Taiwan. The conferral ceremony was attended by President Victor Wei-Chi Liu and his party from the university, who were visiting Japan and who were welcomed by Soka University Board of Trustee Chair Yasunori Tashiro, President Yoshihisa Baba, and representatives of faculty, staff, and students.

Chung Hua University was founded in 1990 by entrepreneurs in Hsinchu, with the aim to foster capable individuals that can take responsibility for the development of local industries. Its original name, “Chung Hua Polytechnic Institute,” as a university specializing in science and technology, was later changed to “Chung Hua University,” and today, it has developed into a university with six colleges and 22 departments, including those for humanities and tourism. Located nearby is Hsinchu Science Park, which is known as the “Silicon Valley of Taiwan,” as well as the Industrial Technology Research Institute, and here, many graduates of the university in the field of science are actively making contributions.

In his citation, President Liu shared: “Dr. Ikeda’s reputation has expanded far and wide, and he is a recipient of honors and awards from around the world with over 20 state decorations, including the Ordre des Arts et des Lettres from France. In addition, he has received honorary citizenship from over 800 cities and has been conferred over 380 honorary degrees from universities and academic institutions around the world, including the Lomonosov Moscow State University, Peking University, University of Glasgow, University of Denver, and others. Our university, which was founded by ardent proponents of education in the Hsinchu area, considers fostering ‘Sunshine Youth,’ who acquire learning and virtue and who possess a fair and just character, as our important responsibility, and we have continued to pursue this path. This, in many ways, relates to your esteemed Soka University in terms of your founding ideals and practices. From the ancient past, it is said that ‘There are teachers that teach words and phrases in the classic Confucian writings but it is difficult to encounter a teacher who teaches the way of humans.’ Dr. Ikeda is a rare and great example, and the faculty, staff, and students of our university hold him in high regards. Representing our university, I would like to humbly express my respect to him with the conferral of this Honorary Professorship.”

In his words of appreciation read out on his behalf, Soka University founder Dr. Ikeda shared: “It is proudly sung in the school song of your esteemed Chung Hua University, ‘The great Chung Hua, great numbers of talented individuals, wise men of Hsinchu, together let’s join hands and build our university,’ ‘Diligence, honesty, integrity, and upright, here we learn the truth,’ and ‘Diligence, honesty, integrity, and truth, here good deeds are conducted.’ True to this spirit, your esteemed university has fostered various outstanding individuals as a state-of-the-art university in the land of Hsinchu, a city of science and technology, known as the ‘Silicon Valley of Taiwan,’ leading the new era. (Abbr.) The campus of your esteemed university stands tall in Hsinchu City, which has honored me as a citizen. ‘Hsinchu’—New young bamboo shoots are symbols of a life force that continues to grow. At the same time, each bamboo gracefully stands tall, and moreover, their stems are connected beneath the earth and support each other. That is why they can withstand even violent winds. Human society is the same. Herein lies the significance of connecting the world through educational exchanges. If young global citizens are connected through deep friendship and trust, and if they stand upon the motherly Earth of humanistic education and work together hand-in-hand, we can surely build a firm and great solidarity, contributing to the happiness of humankind and peace for a global society without being shaken by the storms of any era.”