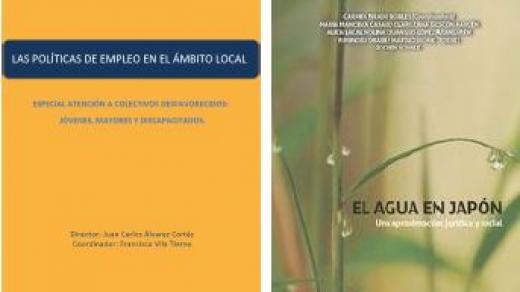 LAS POLÍTICAS DE EMPLEO EN EL ÁMBITO LOCAL is a progress report of the Proyecto Internacional en materia de empleo en el ámbito local (“International Project on Local Employment Issues”), which was planned by several participating researchers from southern Europe. The research focuses on the roles of local administrations in terms of employment policies in Spain and Italy. It analyzes features and issues, and further, a multifaceted and detailed analysis is made on employment issues regarding youth, the elderly, and those with disabilities. Professor Okabe participated in this project with the role of providing comparative research between employment policies in Japan and southern European countries, and his report was introduced as a progress report this time.
The report can be viewed via the link below:
https://dialnet.unirioja.es/servlet/libro?codigo=705541

Spain’s main research team focusing on Japanese law, of which the headquarters is located at the University of Zaragoza in Spain (GRUPO DE INVESTIGACIÓN JAPÓN), holds scholarly symposiums on Japanese law every year, and Professor Okabe has given reports twice at these symposiums. The first report was made in 2015 under the title, La reforma laboral del gobierno Abe. Su incidencia en la vida y los derechos de los trabajadores japoneses (“Labor Reform of the Abe Administration”), in which Professor Okabe reported on the current status of labor reform and issues in Japan. Its progress report is carried in the collection of scholarly papers, LOS DERECHOS INDIVIDUALES EN EL ORDENAMIENTO JAPONÉS (“The Rights of Individuals Under Japan’s Law”) (Coords. Carmen Tirado Robles, Francisco Barberán Pelegrín, THOMSON REUTERS ARANZADI, 2016.) This paper was the one that was submitted at the symposium held in 2017.
The paper can be viewed via the link below:
http://www.tirant.com/humanidades/libro/el-agua-en-japon-una-aproximacion-juridica-y-social-carmen-tirado-robles-9788417203597

Professor Okabe commented as follows: “I was able to create the employment policy project with the great support of Professor Vila, and Professor Tirado and Professor Barberán helped with the report at the scholarly symposium at the University of Zaragoza. I am sincerely grateful to these three professors. However, regarding the contents of what I wrote, I am aware that I still have not been able to analyze Japanese law from a comparative point of view. I will deepen my research and make efforts so that next time I can complete an improved report.”