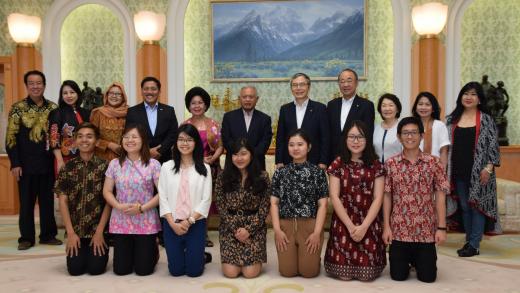 On Friday, August 24th, former Minister of Defense of the Republic of Indonesia Dr. Ir. Purnomo Yusgiantoro visited Soka University and meeting with the Chairman of the Board of Trustees Yasunori Tashiro, President Yoshihisa Baba, Soka Women’s College Keiko Ishikawa and 7 international student representatives from Indonesia.

The Republic of Indonesia is a country located in the southern part of Southeast Asia. It is the fourth largest country in the world with more than 230 million people and is also known as the nation with the world's largest Muslim population. Soka University currently holds exchange programs with three universities in Indonesia. (the University of Indonesia, Institute of Technology Sepuluh Nopember(ITS), Surabaya, and Ma Chung University.)

During the discussions, former Minister of Defense Dr. Sugiantro touched upon the presentation of the Honorary Doctorate of Soka University to the President of Yudhoyono (then) of Indonesia in 2014, and during the speech, the president spoke about the importance of education and said, “I also heard that Miss. Sinta Nuria, wife of former President Abdurrahman Wahid having a dialogue with Dr. Ikeda, and gave speeches to students at Soka Women's College numerous times and I truly believe that it is a wonderful thing. I want to thank everyone today for the warm welcome. Especially, I am pleased to see all of the international students. I sincerely hope from the bottom of my heart for the relationship between Indonesia and Japan to continue developing.