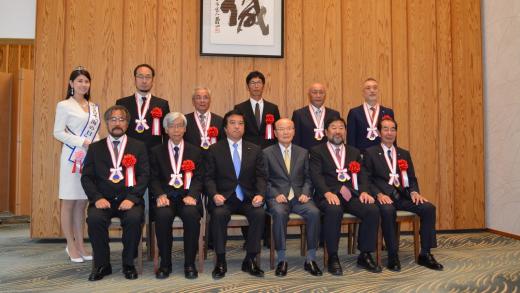 On August 31st (Friday), the award ceremony of the 11th Ocean State Promotion Meritorious Award (Prime Minister’s Award) took place in Small Hall at the Prime Minister’s residence, where Soka University Professor Ken Furuya of the Graduate School of Engineering was awarded in the Science and Technology Category in the area of “special merit in promoting the ocean state of Japan.”

Taking place since fiscal year 2008, the commendation is supported by: the Ministry of Education, Culture, Sports, Science and Technology; Ministry of Agriculture, Forestry and Fisheries; Ministry of Economy, Trade and Industry; Ministry of Land, Infrastructure and Transport; and the Ministry of the Environment, with cooperation from the Cabinet’s Headquarters for Ocean Policy. By awarding individuals and groups that have made prominent contributions in fields related to the ocean based on the Basic Act on Ocean Policy and the Basic Plan on Ocean Policy, and by widely sharing their achievements, the commendation aims to provide an opportunity for people in Japan to deepen their understanding of the ocean. At the 11th ceremony, six individuals and two groups in Japan were given the award.

Professor Furuya commented on the award, stating “I am extremely happy to receive an appraisal on my ecological research on marine plankton and shared my determination to continue research on the best sustainable usage of the blessings produced by the ecosystem.”

■ Achievement items (excerpt from information materials)
Elucidation of the biological production mechanism in the “desert of the ocean”
Using the newly developed nutrient salt analysis method to elucidate nutrient salt concentration distribution on a nanomolar level over the entire subtropical and tropical areas of the Pacific Ocean, it was clarified that, in the western part of the northern Pacific Ocean, phosphate is being depleted, serving as a cause of the rate-limitation of biological production.
It further clarifies that the depletion of phosphate is mainly caused by unicellular nitrogen fixers and indicated the importance of small-size unicellular nitrogen-fixing phytoplankton, while also cooperating with researchers overseas to successfully reappraise the nitrogen fixation amount of the entire ocean.
With the discovery of phosphate-depleted areas, in terms of ocean ecozones in the research of ocean ecosystems, it shows the need to not simply apply climate zones but to focus on the environment and ecosystem as an entity and to view the ocean based on a coherent sub-system. This is attracting a lot of attention at international conferences.