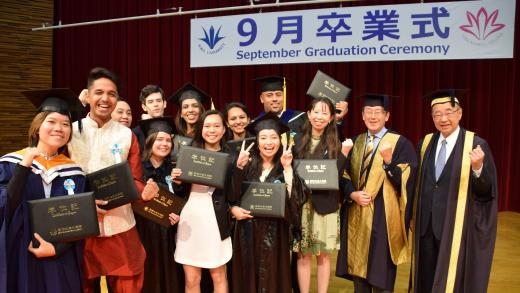 The September Graduation was Held

At Soka University, from the class of 1999, the “semester system” was implemented to divide a year into half and starting in 2003 two graduations were held every year. From this year, the names of the semester changed from first semester and second semester to spring semester and fall semester.
At the Ceremony, after a commemorative performance by the New Century Orchestra, Soka Women’s College President Mrs. Ishikawa gave opening remarks followed by the reading of Soka University Founder Dr. Daisaku Ikeda’s message by Chairman of the Board of Trustees Mr. Tashiro. In his message, Founder Dr. Ikeda said, “Each and every one of you has the wisdom of "creation" or "value creation" learned and polished at the highest seat of learning of humanistic education. Also, each and every one of you has gained the heart of the “Never giving up spirit” gained with your fellow classmates here at the center of global citizens. There is nothing stronger than this.” He also congratulated each student with words of keeping Soka’s pride in their heart, at their desired place, wisely and brightly with perseverance by decorating history with triumph.

After, handing out the diplomas to each student, Soka University President Mr. Baba gave closing remarks mentioning, “In society, I believe the length of time of headwinds is overwhelmingly longer than when it is fair winds. However, please continue to strive to create a society with courage and power, with the "never giving up spirit" gained through the student life, even when you face adversity and difficulties. Always encourage each other through the worldwide network connection of alumnus, I hope that you will be active for the juniors that follow you. Let's start embracing the life of value creation bravely in society from today.
To conclude and for the departure of a new journey, everyone in attendance sang the Soka University Student Song.