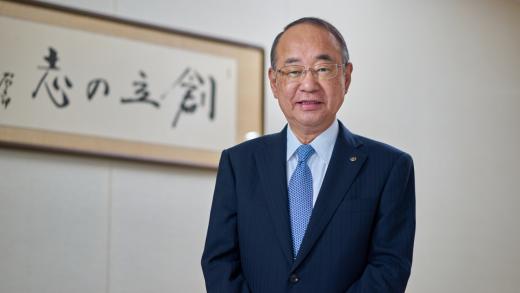 New Year’s Greetings Chairman of the Board of Trustees Mr. Tashiro

I offer you all my sincere greetings for this new year of 2019. In Japan, major natural disasters continued last year. I express my sincere condolences to those who lost their lives and offer my deepest sympathy to all those affected.

Soka University announced its Grand Design toward the 50th anniversary of its founding in 2010 and has been engaged in fostering “creative individuals” while upholding the founding principles established by the founder, Dr. Daisaku Ikeda. Last year in April, we saw the establishment of the Graduate School of International Peace Studies and the Department of Human Studies, Faculty of Letters as part of our correspondence courses, while Soka Women’s College was reborn with one department: the Department of Global Business Studies. Corresponding to the changes of the times, we have established and remodeled faculties and courses, and this led to the enhanced development of the university, which now encompasses eight faculties, five research courses in the graduate school, and two research courses in the professional graduate school.

In order to support the students’ growth from a financial standpoint, Soka University and Soka Women’s College have expanded their scholarship system to include a scholarship with no repayment obligations, along with providing scholarships for siblings enrolled at the same time, while also adding financial support for students returning to their hometowns and searching for jobs. In addition, we have made efforts to make student life fulfilling with a newly established international dormitory where Japanese and international students can reside together, along with a shuttle bus running between Shinjuku and Soka University, as well as providing breakfast for 100 yen.

It is thanks to the support and cooperation of many, including parents, guardians, and alumni, that we have been able to prepare such an environment where students can learn with a sense of assurance. In addition, I express my deepest appreciation to all of your noble contributions during the collection of funds to promote the “Top Global University Project,” which began in April last year, so as to further strengthen scholarships for accepting international students and sending students overseas.

This year, too, Soka University and Soka Women’s College are determined to dynamically advance toward the 50th anniversary of their founding, under the founder’s philosophy of “students first.”

In conclusion, I wholeheartedly pray for everyone’s good health and happiness upon the start of this new year of 2019.