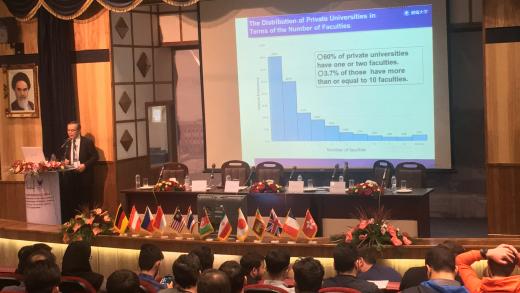 Soka University President Yoshihisa Baba participated in an annual general meeting and board of directors meeting of the Association of Southeast Asian Institutions of Higher Learning (ASAIHL) held on December 10 and 11 at Iran’s Islamic Azad University.

On December 10, on the occasion of the ASAIHL board of directors meeting, President Baba reported on the ASAIH conference held at Soka University in March 2018. The following day, on December 11, an annual general meeting was held with approximately 300 representatives from institutions of higher learning that belong to the association.

At the general meeting, Iran's deputy minister for science, research, and technology shared his greetings, and a keynote speech was made by a representative of Iran’s institutions of higher learning. Later, new appointments for the ASAIHL were made, and President Yoshihisa Baba was appointed as second vice president. This was followed by President Baba’s lecture titled, “The Role of Private Schools in Japan – Past, Present, and Future.”