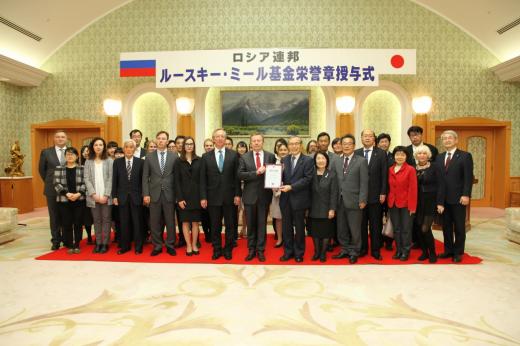 “Honor Award” Presented to the Founder from Russia’s Russkiy Mir Foundation, with a Statute of Astronaut Yuri Gagarin Placed at Central Tower

On December 8 (Saturday), at the Soka University Central Tower, an “Honor Award” was presented to founder Dr. Daisaku Ikeda from the Russkiy Mir Foundation, which strives to promote Russian culture. The conferral ceremony was attended by the foundation’s Executive Director Vladimir Kochin, Russian Centers member of management Nikolai Sergeychev, and Ambassador Mikhail Yurievich Galuzin of the Russian Federation to Japan, who were welcomed by Soka University’s President Yoshihisa Baba and representatives of faculty, staff, and students.

The Russkiy Mir Foundation is a non-profit organization that was founded in 2007 by presidential order. It develops various projects that support the learning of the Russian language and the promotion of Russian culture in over 100 countries around the world. In 2016, based on an agreement with the foundation, Soka University established its Russian Centers as the first of their kind in Japan, with the aim to promote exchange between the two nations.
In his citation, Executive Director Vladimir Kochin shared: “Dr. Ikeda has been engaged in the promotion of humanistic culture and education and is an unparalleled activist. He has also promoted friendship between Russia and Japan for many years.” Kochin also referred to Soka University’s engagement in expanding dialogue for peace throughout the world.

Next, an “Honor Award” was entrusted to President Baba on behalf of the founder, in praise of the founder’s contribution to Russian language education and to cultural exchange. In the founder’s acceptance speech, which was read on by President Baba on the founder’s behalf, founder Dr. Daisaku Ikeda shared that politics, economics, science, law, and all undertakings of society begin and end with human beings. He said that education is the most-important and most-sacred undertaking. The founder also stated that such thinking also forms the basis of the founding principles of Soka education. The founder concluded by introducing the words of Yuri Gagarin, the world’s first astronaut: “What is the greatest happiness for human beings. It is to participate in new developments,” and the founder shared his expectations for the further development of youth exchanges between the two nations.

Also, on this day, an unveiling ceremony took place for a statue of Yuri Gagarin that was placed at Soka University’s Central Tower as a symbol of friendship and solidarity between Japan and Russia. A Russian speech contest also took place that was attended by the party from the Russkiy Mir Foundation and Ambassador Mikhail Yurievich Galuzin.

The conferral ceremony, unveiling ceremony, and the contest, which were all held at Soka University, were put on as part of the official event, “Russian Language Festival,” for the “Russia Year in Japan.”