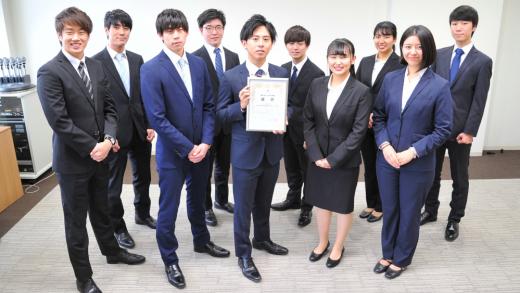 The award ceremony took place on January 31 (Thursday) at Soka University, and the certificate was presented to Mr. Kenta Okazaki (sophomore, Faculty of Economics), team chief of the Theory Association by the Administrative Office of the Japan Economic Studies Education Association.
Five to nine individuals from each group, including student seminars and clubs who belong to a university or graduate school, can register for the Economics Records Examination University Contest in which each group competes for a total score with their top-four individuals in the two subjects of microeconomics and macroeconomics.

A total of 148 teams including 22 teams from 10 schools participated in the 30th university contest. Two teams participated from Soka University, and Team A won the championship with an average point score of 392.5. Team B won third place following the Senshu University team with an average of 332.5 points. In terms of individual points, among the total of 148 examinees out of all ERE subjects, Mr. Emoto won the championship.

Team chief Mr. Okazaki commented: “Two teams participated this time from Soka University. As the Theory Association, we held study meetings every Saturday and on weekdays, and we challenged ourselves individually in fields that we are not good at. This became our rhythm, and we exerted ourselves in our daily studies with unity until the day of the contest. We aimed to win again this year, and I am so happy that each of us continued to make efforts that led to winning a championship. I appreciate everyone who supported us, and we want to win in the next contest as well, renewing the 11 consecutive wins as achieved by our seniors.”
Mr. Emoto, who won first place in the individual contest, shared: “I prepared myself knowing that to get a No.1 score on an individual basis will lead to a group championship. From Soka University, seven of us were in the top 10. The key to victory was that we thoroughly considered matters that we couldn’t understand without leaving things as-is. I will cherish the experiences and what I learned from this contest and will continue making effort toward the next contest.”
Champions: Team A
Mr. Kenta Okazaki, Mr. Kamui Emoto, Ms. Moeko Tanabe, Ms. Shioka Otsuka, Mr. Tatsuya Hidaka
Third place: Team B
Mr. Yuta Goto, Mr. Kosuke Suzuka, Mr. Kenichi Otsuki, Ms. Kanon Goto, Ms. Megumi Niang Sian Kim, Mr. Eichi Hotta