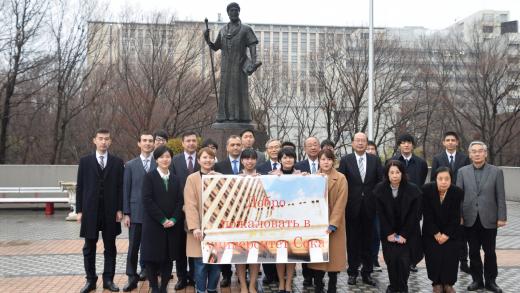 On February 8 (Wednesday), Ambassador Gayrat Fazilov to Japan and Second Secretary Ajizov Sirojeni and others of the Republic of Uzbekistan visited Soka University, joining a ceremony to offer flowers commemorating the 578th birthday of poet Alisher Navoiy of Uzbekistan (date of birth: February 9, 1441) of whom a statue is placed in the front courtyard of Soka University’s Ikeda Auditorium.

Alisher Navoiy (1441–1501) is considered the founder of Uzbek literature, and not only was he a poet, scholar, musician, and penman, he was also a statesman, mediating conflicts within the territory, and he devoted himself to reducing tax for citizens. He also carried out goodwill projects and protected the arts using his own finances. To this day, he is respected by many citizens in Central Asia.

Words written on the base of the Navoiy statue at Ikeda Auditorium:
All people of the world
Do not harbor hatred to one another
Be good friends to one another
Friendship is the way of human beings

At the flower-offering ceremony, President Yoshihisa Baba shared his greetings and said: “Soka University’s founder has shared information on poet Navoiy several times in his speeches. At the base of the statue of Navoiy on campus, the following words are engraved: ‘Be good friends to one another / Friendship is the way of human beings.’ We would like to promote further exchanges between Soka University and universities in Uzbekistan so as to deepen the friendship between our two nations.”

Lastly, Ambassador Fazilov shared that the number of youth proceeding to higher education is increasing in Uzbekistan and that the nation is emphasizing the importance of providing fulfilling higher education as well as the importance of studying abroad. The ambassador also expressed his hopes that the youth of Uzbekistan will carry on the “friendship” that the poet Navoiy cherishes, continue deepening exchanges with Soka University, and share Navoiy’s spirit to the students of Soka University.

After this, flowers were offered to the base of the Navoiy statue, and this was followed by a dialogue between Ambassador Fazilov’s party and President Baba at the Central Education Tower.