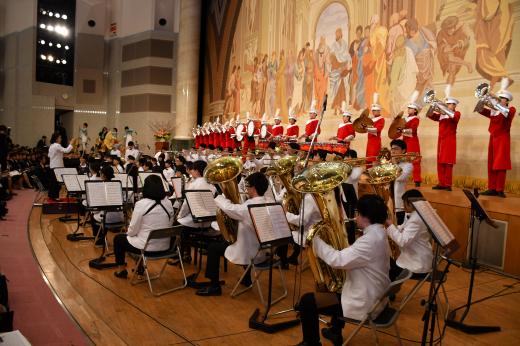 On April 2 (Tuesday), the 49th Soka University and the 35th Soka Women’s College Entrance Ceremony was held at the Ikeda Auditorium, where cherry blossoms bloomed with fragrance.

The ceremony began with opening words by the newly appointed Soka Women’s College President Noboru Mizumoto, and Board of Trustees Chair Yasunori Tashiro read a message from founder Dr. Daisaku Ikeda. In his message, the founder gave three words of wisdom to the new students: “Expand your harmonious network of global citizens!” “Create a new wind of learning that opens up a new era!” and “Let the morning sun of creative life rise!” and encouraged them by saying: “Soka Women’s College is aiming toward next year, which marks the 35th anniversary of its founding, with Soka University at its 50th anniversary, pouring its energies toward fostering ‘creative global citizens’ more than ever before. In this castle of learning, please resolutely make the morning sun of your own creative life rise. And, warmly embrace your parents to whom you owe a debt of gratitude, illuminate those that are noble, along with the world in general, as it swims in darkness and confusion, and cry out for the dawn of the triumph of humanism. (Omitted). Congratulations on today! Let’s create a glorious history together!”

Director of the Student Affairs Office Masayuki Okutomi introduced the entering students: 1,662 undergraduate students, 345 correspondence course students, 90 Soka University Preparatory Japanese Language Program and exchange students, 91 masters and 14 doctors program students, 17 law school students, 9 Graduate School of Teacher Education students, and 229 Soka Women’s College students.
This was followed by a statement of determination by a newly joining student, after which Soka University President Yoshihisa Baba shared his congratulatory words by saying, “From today, together with all of you, we would like to advance, aiming toward April 2, 2021, the 50th anniversary of the founding of Soka University, in order to ensure that Soka University and Soka education will continue for all eternity. Needless to say, the 50th anniversary will mark a new start toward the next 50th and 100th anniversaries. What kind of start we can make toward the centennial will be determined in the next two years. In particular, new undergraduate students this year share a deep connection and will serve as a bridge linking the first 50 years of Soka University to the second 50 years. I express my sincere expectations that you will play a major role in this regard.”

The entrance ceremony concluded with everyone singing the student song together. 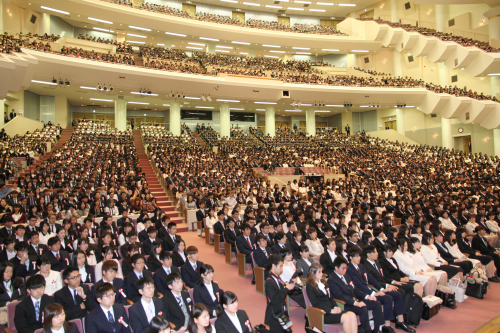 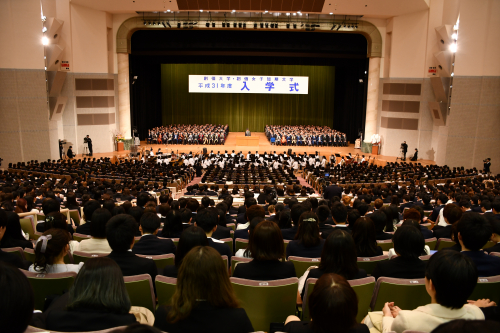