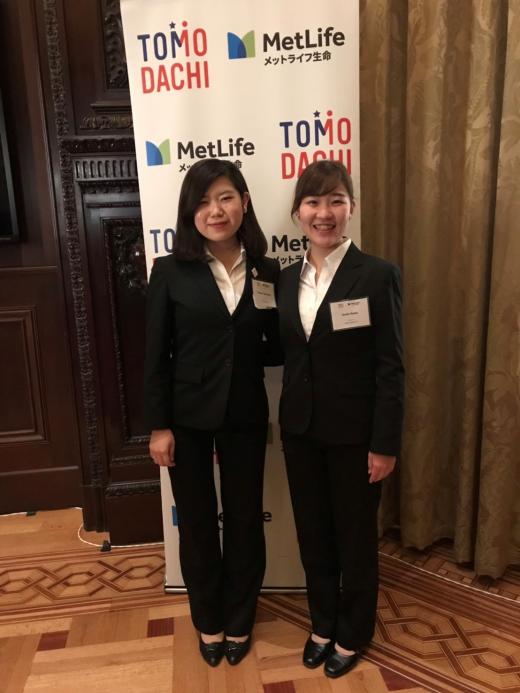 From March 20 to 28 (local time in the U.S.), the TOMODACHI MetLife Women’s Leadership Program was held in Washington D.C. and New York, and was participated in by two students from Soka University: Ms. Chisato Takahashi (junior, Faculty of Economics) and Ms. Asuka Nawa (junior, Faculty of Law). The TOMODACHI MetLife Women’s Leadership Program is one of the TOMODACHI Initiative programs sponsored by the U.S.-Japan Council and the U.S. Embassy in Tokyo and supported by the Japanese government and by corporations, groups, and individuals in Japan and the U.S.

The TOMODACHI Initiative was born out of the support efforts toward restoration after the devastation in East Japan due to the 2011 Great East Japan Earthquake. The initiative is a public and private partnership led by the U.S. Embassy in Japan and the U.S.-Japan Council, aiming to foster the next generation of leaders in Japan and the U.S. through programs related to education, cultural exchange, and leadership. In the TOMODACHI MetLife Women’s Leadership Program, female university students of Japan that have a high level of awareness pair up with Japan’s young and mid-career female leaders in order to encourage networking among next-generation female leaders in Japan.

Ms. Takahashi, a participant, commented: “Deepening our dialogue on how to contribute to society as female leaders, together with outstanding female students that gathered from across Japan, was an irreplaceable and precious experience for me. I was extremely inspired as we discussed until midnight our future dreams and the issues currently facing international society. Through these sessions, I was able to hone my skills as a leader, such as in thinking about how I can further discover my strengths and contribute to society, along with how to communicate with others so as to create new networks. I also had the opportunity to have a casual conversation with other career-minded women that actually play active roles in society. I was able to ask honest questions about their lifestyle and views on life. As I listened to the stories of numerous female leaders, I felt that by continuing to believe in my own latent potential and by making decisions via my own will, regardless of how others appraise me, I can enable myself to make life choices filled with a sense of responsibility and fulfillment. The stay in the U.S. was approximately one week, which was brief, but I would like to share this precious learning experience with all those around me. It was also an opportunity for focused learning so as to polish myself as a female leader and contribute to society. Using this experience as my spiritual nourishment, I will give my all in each moment of my learning process so as to grow as a capable person that can help lead society.”

Ms. Nawa commented as follows: “Through the 10-month program, which included nine days of training in the U.S., I was able to deeply learn about and contemplate myself and the topic of leadership. Before participating in this program, while I did have an interest in leadership, I couldn’t gain a clear image of it. However, as I engaged in discussions with group members toward the final day’s presentation, I was able to establish my ideal image of what leadership means. Also, through various workshops and group work in the program, I was able to honestly take a look in the mirror and deepen my understanding of myself. I would like to use what I discovered for my future growth. Above all, through various encounters, I was very inspired by my fellow female students, who have a high standard regarding their aspirations and abilities, as well as by female leaders that are already playing major roles in society. I would like to challenge myself in various things, placing study first, so that I can also play an active role in society together with them, in the future.”