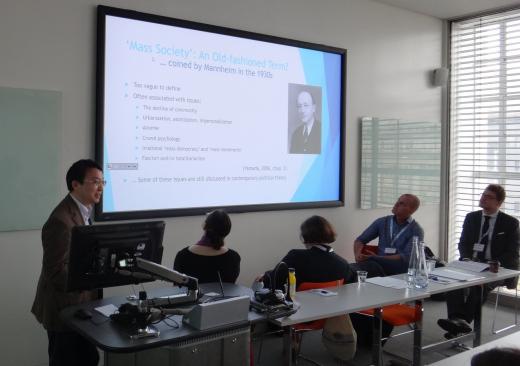 On April 15 (Monday) to 17 (Wednesday), Soka University Professor Ryusaku Yamada of the Faculty of International Liberal Arts presented his research at the Political Studies Association (PSA). The presentation was held in Nottingham, United Kingdom.
The PSA was established in 1950 and has international links with the International Political Science Association (IPSA), the American Political Science Association (APSA), and others. This was the PSA’s 69th conference, and, under the common theme of “(Un)Sustainable Politics in a Changing World,” approximately 650 presenters gathered not only from the United Kingdom but also from Germany, Spain, Ireland, Poland, Norway, the United States, and China.

Professor Yamada appeared in the panel titled “Theorising Politics and International Relations in the 21st Century” held on April 16 and presented under the theme of “Mannheim, Hayek, Popper and ‘Planned Thinking’ in a Changing World.” In this presentation, he assessed the disintegrating society of the people, which Karl Mannheim considered an issue in 1930–1940, as a “changing world,” and he pointed out that toward reconstruction, Mannheim, who proposed a “planning for freedom,” began his argument from “planned thinking.” Professor Yamada also examined criticisms against Mannheim by Friedrich Hayek and Karl Popper, who stated that “planning” will inevitably fall into a dictatorship of centralized power, and Professor Yamada gave an interpretation that there is a difference between the “planning” as considered by them and the “planning” proposed by Mannheim and that therefore, criticism from the two are based on misunderstandings and are not necessarily valid.

Professor Yamada shared his thoughts about the research presentation, saying that, “I have continued to steadily research the forgotten argument of the British era by forgotten thinker Mannheim, thanks to the Grants-in-Aid for Scientific Research, but it was, in fact, quite some time ago that I thought of the contents that I presented this time at the association. This time, I felt that these contents can be accepted to a certain degree in the United Kingdom as well. When we hear the word “planning” as relating to politics, we might immediately imagine the planned economy of the former Soviet Union. However, I felt that “planning for freedom,” which Mannheim proposed as a third method, and which is neither ‘laissez-faire liberalism’ nor ‘totalitarian dictatorship,’ is something that is worth reconsidering, both in terms of the history of ideas as well as a modern issue.” Professor Yamada also said: “Although we need to carefully consider the difference and commonality of the ‘laissez-faire liberalism’ that Mannheim talks about and today’s neoliberalism, the ‘planned thinking’ that he pursued was not static thinking based on a so-called ‘constructivism’ or rigid ideology, but rather, it can be said that it is a dynamic way of thinking that strives to recognize and grasp a reality that is constantly changing, according to such changes. Apart from whether or not we use the term ‘planning,’ I believe that this is a way of thinking that we should learn from, as residents of the 21st century, where change is significant.”

An outline of Professor Yamada’s presentation is as follows:
This paper reconsiders Karl Mannheim’s conception of "planned thinking" that he pursued grasping a changing world. After his exile from Nazi Germany to England, Mannheim attempted to develop his idea of "planning for freedom" as the third way, neither laissez-faire liberalism nor totalitarian dictatorship, towards the reconstruction of disintegrating mass society. One reason why his arguments in his English time were not sufficiently understood would be because he used misleading term "planning". Friedrich A. Hayek and Karl R. Popper rejected "planning" as collectivism/socialism that brings about totalitarianism. We need to examine whether Hayek and Popper’s criticism of "planning" was relevant to Mannheim’s thought because the two theorists seemed not to attempt to closely understand Mannheimian conception of "planning" and "planned thinking".
This paper examines three points of criticism of "planning" by Hayek and Popper. (1) Hayek and Popper stressed that "planning" would inevitably be totalitarianism controlled by a centralized government. On the contrary, Mannheim regarded the totalitarian dictatorship as the consequence of the disintegration of society that accompanied laissez-faire drift. He believed that the cause of totalitarianism was immanent in liberalism. Mannheim’s "planning for freedom" was based on his thought that uniform planning would not work for social reintegration because modern mass society is so complex. (2) Hayek insisted that "planning" requires a perfect ethical code that ranks various values. For him, it is impossible to have such a code that can decide what to be done for the whole society. While Mannheim never rejected the diversity of values, he argued that the lack of the shared norm makes democracy inefficient and brings about the fascist view that "a bad decision is better than no decision". For Mannheim, the cause of dictatorship was conflicts and disruption that were caused by the lack of shared norm and values. (3) Popper criticized Mannheim’s "planning" as an example of historicism and holism, and he determined that Mannheim believed he found out the true ends of society by saying "transition from laissez-faire to a planned society". However, what Mannheim argued was not about a universal law but what Popper called "trend", and Mannheim’s introduction of "Principia media" instead of general principle made his "planning" similar to Popper’s piecemeal engineering.
This paper then considers Mannheim’s idea of "planned thinking". His discussions about "planning" began from the consideration of "planned thinking" that would be required for the diagnosis of the world in accordance with its change. Mannheim’s usage of "planning" was unique: he distinguished "planning" from "establishing" (creating a social order from scratch according to a blueprint) and "administrating" (controlling an established social order by the state). What Mannheim called "planning" was neither abstract nor static but rather the one that attempts to grasp the dynamic reality of changing mass society. Mannheim in England was keen about social education for producing people who are aware of the total situation of society towards its reconstruction, while Hayek and Popper believed that education in planning must be indoctrination and stereotyping. Mannheimian social awareness strongly connected with "planned thinking" and such thinking was to be acquired not only by planner but also by common people who lived in a changing world. This paper attempts to reveal what is his "planned thinking" and to re-evaluate his insights about it in the context of the social world today.